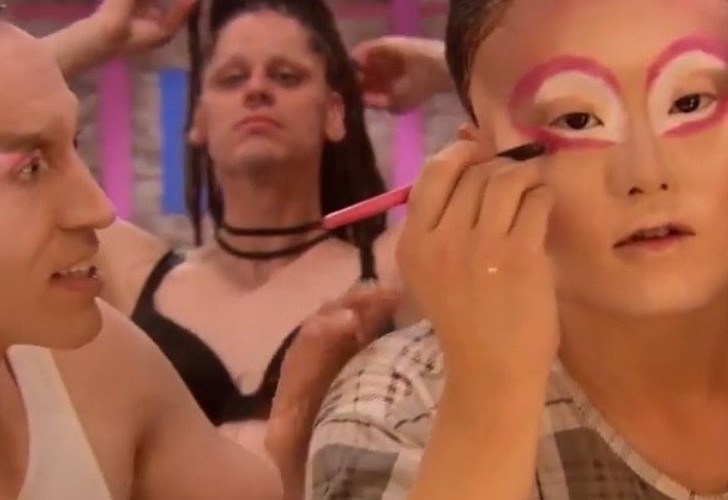 Second week in of RuPaul’s Drag Race and we have fallen in love with super cute Kim Chi.

This week, Kim found it hard to learn choreography for the hilarious Bitch Perfect Task and branded it his biggest nightmare but also admitted that his lack of confidence mainly comes from his tough time as a teenager.

‘Growing up I was definitely an outsider,’ he told his fellow queens. ‘The weird fat art kid with a strong lisp and strong accent so I never learned how to dance or feel the music. I used to be 350lbs until about three years ago, Obviously I’m not as fat as I used to be but the fat kid is still in me. When you’re fat people don’t treat you like a person. Like when you take public transport people don’t want to sit near you.’

But the Korean born drag wannabe says he is keen to overcome his lack of confidence. ‘Because of these experiences I am still learning how to be confident in my self and comfortable in my own skin. I want to commit to it and become better!’

When asked if people started hitting on him after he lost weight he revealed that he was still a virgin, which shocked the rest of queens, in particular Acid Betty who said he really fancied him. But when the other girls suggested that he may not notice the interest from others he said, ‘Hopefully someone will see the beauty in me one of these days.’

Well, fellow drag queen Bob The  Drag Queen reckons that once Kim Chi he realises who he is, things will get better. ‘He is still a virgin because he is not aware that he is a six foot four good-looking gay man – he needs to own that.’

Elsewhere in the episode, the queens were shocked by a double elimination and RuPaul leaving us on a cliffhanger as she makes a mysterious call to a unknown recipient about joining to the show. Ooooh, who could it be!