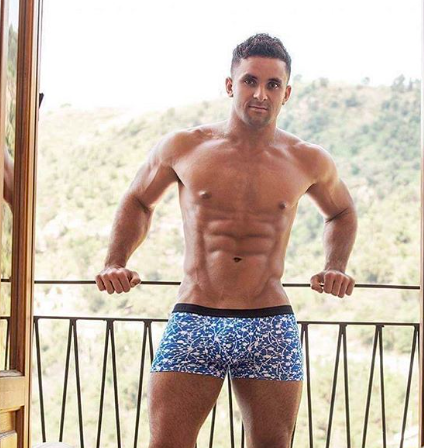 We don’t need to be reminded just how good gorgeous former rugby hunk Sam Stanley was on the pitch. But were you aware that the muscled marvel has talents other than grabbing hold of balls and getting down and dirty in a scrum? You see, there’s more to Mr Stanley than meets the eye. He flexes his muscles like an adonis, but he can also sing like the most delightful angel. For the past few months, the 27 year old beefcake, who in 2015 was Britain’s first active professional rugby star to come out, has been posting a series of heart-tugging instagram clips of himself singing in and around the sun-soaked villa he shares with his fiancé Laurence. And what’s more he does it mainly shirtless. Yum! Intrigued to find out more, GuysLikeU caught up with Sam to find out what’s been going on since he publicly came out and what his musical plans are…..

So Sam, we haven’t seen your or a while, where have you been?
Well, I’ve been over in Sicily since the beginning of May. My partner and I have a place out here and we run it as a Homestay where people can come and stay and enjoy stunning views of the Aeolian Islands whilst chilling in our pool. It’s kept us pretty busy here.
Sounds fun. How are things with you and Laurence? Any marriage plans yet? We’re desperate to dust off our wedding suit.
We’re good thanks, just passed the nine year mark together. We’ve been engaged since 2016 but haven’t actually sat down and sorted a date yet. It was bad timing as we up and left to live in Sicily indefinitely and that took priority. Maybe in the next few years but not certain just yet. Time will tell.

What’s life in Sicily like? Is it very different to life back home?
It’s very different to life in the UK that’s for sure. People are very chilled here. I enjoy the contrast between here and London. We bring tourists here so at least we’re doing our part for local businesses (mainly restaurants). You’ll certainly learn to be patient out here, either that or increase frustration as timekeeping isn’t on top of the list for numerous Sicilians.

What’s the gay scene like?
Gay scene? Non-existent in our town. Laurence and I are the gay scene here! That said we went to Palermo Pride back in June and it was huge. From our perspective it was great to see and we enjoyed being amongst like-minded people again. We showed up early and saw a few people here and there but nothing was obvious that Pride was taking place, certainly not like London. All of a sudden the party buses showed up and from nowhere there streets were filled with people from all over! Bright and colourful with pride colours everywhere.

You don’t play rugby anymore – do you miss it?
I don’t play professionally anymore. I did take some time out to see if resting my body would help with previous injuries I had. I actually returned last season and enjoyed half a season playing amateur again and loved it. I am stuck together by tape now though which isn’t ideal. I do miss playing professionally of course. From a young age you put your heart and soul into making it as a pro and I wanted to go on and do great things. But I couldn’t maintain fitness. It is sometimes still hard to take but as the saying goes ‘life goes on’ – it’s tough to find something as rewarding and satisfying in all honesty.

You still keep fit, though. Is it important to you?
Yes I still look after myself. It’s a challenge here in Sicily, however, with all the great food around me. It’s my escape though and alone time which is needed every now and then. I’m a personal trainer and I am doing a degree in Strength and Conditioning.
We love your shirtless singing – your voice is amazing. Do you regularly perform for people?
Thanks, I’m blushing. It is pretty damn hot here so generally shirtless in this heat. I’ve always loved playing the guitar and singing. I performed at a few rugby awards dinners previously. It’s another getaway for me and helps me relax.

Have you considered singing as a career?
It would be a dream. It always seemed a bit farfetched for me but after a performance one year, I had a rugby coach of mine (current Harlequins coach, Paul Gustard) introduce me to a good friend of his who works with Elton John. He took me around Rocket Music Studios but I wouldn’t have been able to do it as a hobby. It’s something you need to take seriously if you really want a career from it. At the time I was up and coming in rugby so didn’t want to take the risk but was pretty cool to have seen the studios. I think it’s now just finding the right path to do so as well as just playing and singing.
We like the idea of you being a naked troubadour. When you come back to the UK would you consider doing some intimate shows?
Haha! You guys. Never say never. I’ll maybe leave this one at that. Who’d even come to my shows? Not sure what that sort of show would turn into.