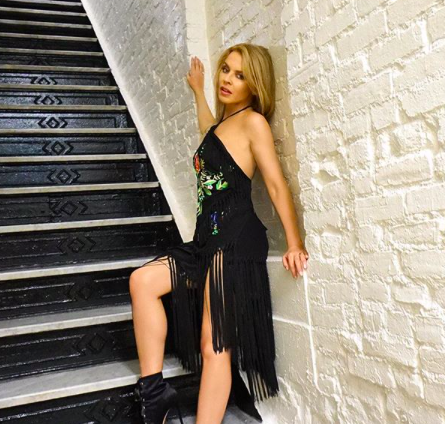 It might be the album that has been described by critics as one of the forgotten gems of the 1990s, but it’s the one Kylie Minogue record that has Kylie Minogue fans at loggerheads after a few shandies.

Impossible Princess, the Aussie superstar’s brief foray into experimental dance, was already considered something of a commercial risk due to its lack of classic pop moments, but due to external events, the album was faced with with tougher obstacles.

The DIMINUTIVE COLLECTION EPISODE 8: IMPOSSIBLE PRINCESS IT’S WAR…….. This week Christy G and Kieran catfight over Impossible Princess. One loves it, one hates it. Is it Kylie’s most exceptional album? Or is it a pretentious long player lacking proper pop tunes? Have a listen and work out which team you’re on! #TeamChristy or #TeamKieran – the choice is yours! Check out all the episodes on Spotify, Apple etc

A post shared by The Diminutive Collection (@the_diminutive_collection) on Jul 2, 2020 at 10:52am PDT

The record had originally been due to come out in the autumn of 1997. However, when Princess Diana died in a car crash in Paris, the record was held back out of respect until the following year.

After a soft release in Russia, Japan and Poland in October 1997, the album finally debuted in Australia in January 1998, where it was warmly received by fans and critics alike. However, Brit fans had to wait another two months to get their lugholes around the new album – which by then had been renamed Kylie Minogue. However, when the ravenous devotees did get their paws on the record, many were shocked to their very foundations by the odd experimental nature of tracks like Too Far, Limbo and Jump. As a result, it sold just over 40k copies in the UK and has remained to this day one of Kylie’s divisive albums.

But this week Steve Anderson, the album’s producer and an integral part of Kylie’s team, has spoken out in defence of the Aussie superstar’s most divisive album and says that he is proud of the record but understands why fans are divided.

Speaking to Christy G and Kieran, the hosts of popular new Kylie Minogue podcast The Diminutive Collection, the Confide In Me songwriter said: “I think it’s a moment in time. Some critics will look back and say it’s the lost gem of the 90s and others won’t. Every fan has their version of Kylie – some will like Impossible Princess and some will like the pop album.”

In the in depth interview, Steve, who has also written and produced tracks for the likes of Claire Richards, Mark Feehily, Girls Aloud, Holly Valance and many more, said that he is incredibly proud of the work he did with Kylie on Impossible Princess because the record gave the one time bubble gum pop singer a chance to finally establish herself as a credible songwriter.

“The songwriter in Kylie was really coming out, especially in the lyrics,” he said during the podcast. “I obviously know the album is for some people and isn’t for other people, and maybe isn’t what some people would have wanted from her. But I genuinely believe it was a very important record for her to make at the time, even if for nothing else for what to come back from after it. I think it was an itch that needed to be scratched.”

Steve also revealed that Kylie was able to wave goodbye to her pop puppet days of PWL because her new label allowed her to do what she liked in the studio.

“DeConstruction gave her a lot of artistic freedom,” he recalled. “We wondered how far can we push this. We weren’t making an album that was a pop album, or a record with hits on. We were writing and doing stuff and doing songs.  We were experimenting. I mean, it was the time of Massive Attack and Tricky and Portishead. Some of the lyrics Kylie was coming out with I would defy any – for wont of a better term –  ‘pop star’ to come up with some of those things.”

Although Steve admits he and Kylie were proud at the time with the outcome of their experimental opus, the label were concerned that there were no ‘pop’ moments to push to radio.

“When we delivered it, it was a ten track album and was before the Manic Street Preachers were involved,” Steve said. “And we thought ‘this is a lovely piece of work’, but we didn’t think it would sell gazillions. We were very proud of it. Then the label thought they were going to struggle with radio so they got James [Dean Bradfield] on board to write a couple of extra songs (Some Kind Of Bliss, I Don’t Need Anyone] that was fantastic. It did what it needed to do.”

Although the record’s reception failed to excite many of Kylie’s pop-thirsty fans, Steve admits that when he joined Kylie Down Under on her Live & Intimate tour, which he produced, he was pleased to see that Aussie fans had really taken to the record.

“It was helpful when I went to Australia because I saw how much they had embraced it,” Steve said. “I realised that there will always be someone somewhere who will love it. Australia really embraced it. If we hadn’t have done the Live & Intimate tour, we wouldn’t have had Dancing Queen – so everything has a reason.”

And that moment of camp genius which saw Kylie singing the ABBA classic backed by two beefcake dancers in pink feathers, led to Kylie’s comeback disco album Light Years in 2000. But Steve says that he and Kylie had already decided to move away from experimental sounds and star writing a pop long before she had signed to new record deal with Parlophone.

“When I started working on Light Years I didn’t know it was going to be Light Years,” he said. “It was before she signed to Parlophone. So when we were writing So Now Goodbye, there was no Spinning Around. That song came much later, nearer the end. We were at Real World and doing things like B-sides like Harmony and Cover Me With Kisses before the Parlophone deal was there.”

And on the subject of Spinning Around, the chart-topping single that helped Kylie claim her pop princess title, Steve admits that when he first heard the track, he wasn’t convinced it would be a hit.

“The first time I heard Spinning Around was the demo version,’ he recalls. “I liked it but I didn’t love it. But then when I heard the single version I thought that’s amazing.”  And the rest is history.