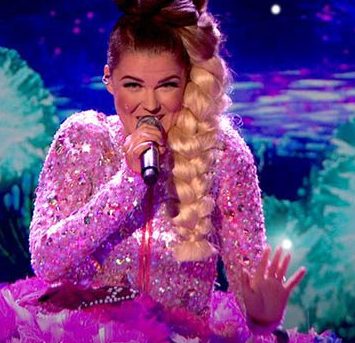 There’s just a few weeks to go before the Eurovision Song Contest takes place in Portugal and it looks like we Brits have found our winner.

Sorry SuRie, it’s not you, but then we can’t vote for you anyway!

Nope, it’s the amazing, former X Factor superstar Saara Aalto who has won our hearts and whose banger of a tune Monsters has got jiggy with our lugholes.

Last night we watched the pintsized Finnish pop vixen wipe the floor with her Euro rivals at the London Eurovision Party at Cafe de Paris.

The singer, who came second to Matt Terry on The X Factor in 2016, performed three amazing tracks that had the crowd of assembled Euro fans shedding disco tears.

The sassy scene stealer opened her spectacular show with a cover of Kylie Minogue’s Your Disco Needs You, flanked by two shirtless hunks and two torso-flashing flagbearers. Ensuring the track was relevant to the event, Saara changed up the lyrics to name check Eurovision stars such as ABBA and our very own Terry Wogan!

Next up was ice cool dancefloor destroyer Queens, a track set to appear on her debut UK album Wild Wild Wonderland out soon.

Saara finished up her set with her amazing Eurovision entry Monsters which has already been a smash across Europe ahead of its official UK release on Friday 13.

If you missed the show and want to see Saara live, she is performing a special Eurovision Wonderland show at Under The Bridge on April 25 where she will be joined by mystery superstar guests and Matt Terry. Tickets are available HERE

Oh yes, our great UK hope SuRie also took to the stagehand had the crowd singing along to her fab entry Storm.