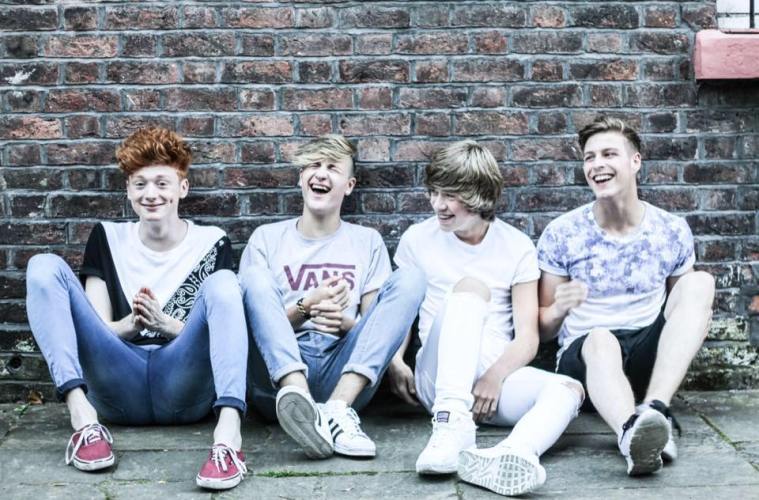 Meet Exposure. The spunkiest boyband since 1D? You decide!

With One Direction about to head off into the pop sunset, a gap has suddenly emerged on the boyband landscape. Which means we need a brand spanking new one to feast our hungry peepers on ASAP!

We hooked up with the guys to give them a once over and discovered what a lovely bunch of rocker-types they are.

So how did you get together?

Jason: It actually came through a surprise gig in Hertfordshire, probably the smallest gig we’ve ever played in fact – however we met Andrew Dutton who introduced us to Harry our manager and I’d say that’s when the break came.

Jamie: Aye, it was that moment that I felt like something was happening – after Harry took us under his wing we began to fly…majestically.

Talis: We’re hoping that our biggest break is yet to come!

Talis: We already had an idea of how we wanted to sound because we are all into the same genres of music! We knew we wanted to be a pop band so from that it was quite easy finding our sound

Giles: Well, we really wanted to stick out in our genre and I think our harmony driven vocals and our indie-pop originals make us different. It’s a sound that we kind of put together ourselves I think.

Jamie: Yeah, we spent so long doing covers that now

Who inspired you most…?

Jamie: James Arthur was definitely the biggest influence on me musically – I did get a lot of help from friends, my mate Aaron Smith definitely gave me the confidence I needed to start singing.

Jason: Definitely Ed Sheeran all the way, I used to spend my time busking on the streets just like Ed and I always remind myself that if he can go from busking to selling out arena’s then so can I!

Giles: It was actually Ray Quinn for me! It was also partly my inspiration to go on X Factor myself.

Talis: You always get the few people telling you that you’re never going to make it or that you can’t sing. It used to bother me a lot when I was younger, I was always concerned about peoples opinions on me or my voice. You have to learn to block those people out I think, there’s many people out there who want to see you fail but there are more people who want to see you succeed and they are the ones that really matter.

Jamie: I think at first it’s hard to convince anyone that it’s the right thing to do. Once my family had actually listened to me play guitar and sing however they were fully behind me!

Jason: I always used to get the ‘I hope you have a plan B’ a lot – I did think I should probably get a trade under my belt so I did actually go to college to study engineering but my tutor told me to stick to the music haha.

What job did you do while you were trying to make it?

Jason: Except the odd bit of watering and gardening I’ve always busked to make my money. I love watching people smiling as they hear me sing, it’s the reason I’m in music!

Giles: I work at a lovely pub in Hertford, I actually really enjoy it!

Talis: I’ve never actually had a job I don’t think! I was a paperboy for a while until it got cold…then I just got my mum to drive around delivering them for me haha!

Who are your favourite music stars? Who did you used to like when you were growing up?

Giles: I have a very diverse taste in music as I was brought up on Motown and swing music! I suppose my favourite current artists are Sam Smith and Justin Bieber.

Jamie: It’s my fellow ginger Ed Sheeran every time for me, the guys an absolute legend and one of the best lyricists going!

Talis: When I was younger I would listen to a lot of Westlife! I love their music and watching them become superstars made me realise that it was all I wanted to do with my life.

Is the music industry an easy place to break into?

Talis: Definitely not! You have to prepared to work really hard and be prepared to work throughout the day and the night. We all work so hard to make sure we get to where we need to be, and that’s one of the many things I love about the boys – they’re always prepared to work 24/7 if we have to.

Jason: It’s definitely a tough nut to crack, it’s definitely a mix between surrounding yourself with the right people to help you on the journey as well as having the right material. It’s about perseverance mainly, don’t stop trying until you get where you want to be!

Jamie: I definitely agree, it’s incredibly challenging and can really test your limits, but if you stay positive then good things will happen. Hard work pays off!

Is it easier to do it by yourselves?

Giles: Well I tried by myself on X Factor – It was hard on my own, especially as I got to judge’s houses. It’s better having my best friends around me for when you need them.

Talis: Making music with the boys is so much easier because we have each other to bounce off and we all have a laugh! I think working these long hours by myself would just result in me falling asleep a lot haha.

Jason: It’s crazy about how much there is in music that you don’t consider or think about and it would be so much harder by myself as I just wouldn’t know where to start! I need the boys around me as I think we push each other!

Talis: Yeah, we definitely keep each other focused and motivate each other.

Have any of the others  considered taking the reality show route?

Talis: Nooooo, definitely not for me!

Jason: Ahaha I must get asked this 100 times a day, I want to prove that we can make it without the shows out there and off our own hard work and merit.

Are you a fan of those shows?

Giles: I do enjoy them, although we never get much time to actually watch them these days!

Jamie: I’m not actually the biggest fan of the shows, I never agree with the decisions and it just winds me up haha so I try and avoid them!

Giles, do you think they made a mistake dumping Louis this year?

Giles: Louis is an AMAZING man, he was incredibly lovely to me when I was on the show and I think it was MAD of Simon to get rid of someone who brings so much entertainment and joy to our TV screens. People just don’t realise how much Louis actually did for the show, he was a role model to us boys and always treated us with respect. When I think about the show and how much I miss certain parts, it’s always Louis and the other boys I miss!

Once upon a time pop stars had to look a certain way, but now you have the likes of Adele who is gorgeous but not a size zero – is she breaking new ground?

Jamie: Adele is a goddess. She’s simply amazing. I hate that upcoming popstars have to conform to industry norms just so they can make it. I love just being me and playing music with my three best friends and I think that’s the most important thing.

Jason: Adele is sticking it to the man! She has an angelic voice and doesn’t get pressured into succumbing to the harsh standards of some people, good on her I say!

Giles: Absolutely spot on from the boys! Everyone is different and it’s refreshing to see someone breaking the norms

Talis: For me it’d have to be Rewind by Paolo Nutini or The One That Got Away by Katy Perry JH: ‘A Drop In The Ocean’ by Ron Pope or ‘Thinking Out Loud’ by Ed Sheeran

Jason: MAN it’s definitely ‘Thinking Out Loud’ by Ed, Jamie hit the nail on the head there. I genuinely don’t know how Ed keeps on doing it! Or it’d have to be ‘Goodbye To Love’ that Jamie wrote recently

Giles: I think I know what we’ll all be saying here haha – for me it’s to be selling out stadiums all over the world in front of our fans!

Talis: Obviously stadiums are the dream, weirdly for me it’s always been my dream to sell out Croke Park in Ireland – that would genuinely complete me I think!

Jamie: Aside from that it’s just to have fun, be able to work every day with my best friends and get our music out to as many people who want to listen!

Check the fellas out here.