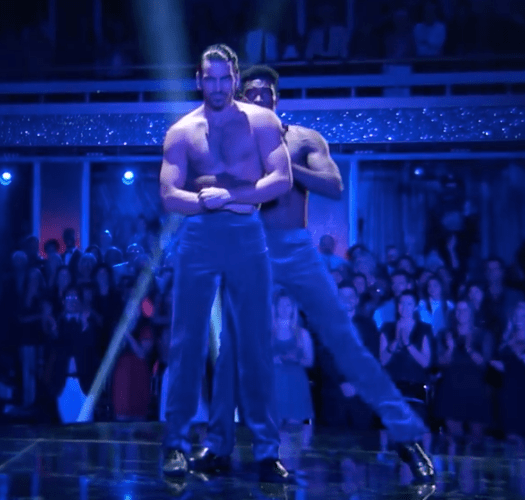 Wow, it really is a supergay week. As gays around the country are gearing up for tonight’s Eurovision and Monday’s Rupaul’s Drag Race finale, America’s Dancing With The Stars has pipped ’em to the post by screening the series’ first same sex dance routine.

It won’t come as any surprise to hear that it was the show’s runaway bisexual star, model Nyle DiMarco, who was the star of the dance, which featured two dance partners.

Bruno Tonioli paired the America Next Top Model star Nyle DiMarco and Peta Murgatroyd with fellow contestants actress Jodie Sweetin and her partner Keo Motsepe for the steamy Argentine tango. After the girls do a short routine together, a stripped to the waist Nyle and Keo start gyrating together on stage.

The couples were rewarded with a standing ovation and Bruno Tolioni appeared tearful with glee at the masterful performance.

‘This is a Dancing with the Stars first, having same-sex dancing,’ Nyle said after the performance. ‘Well, it’s a different experience. Usually I’m lifting Peta but… should it only be for a woman? Maybe Peta can lift me at some stage?’

With Strictly Come Dancing about to return to our screens this summer, could we finally get to see a same sex dance here? Last year Strictly’s Gleb Savechenko said he looked forward to see a same sex dance on the BBC show:  ‘I think this would be great idea! I believe the show should embrace diversity. Dance is for everyone. If it happened, I would look forward to doing some very exciting and very different choreography!