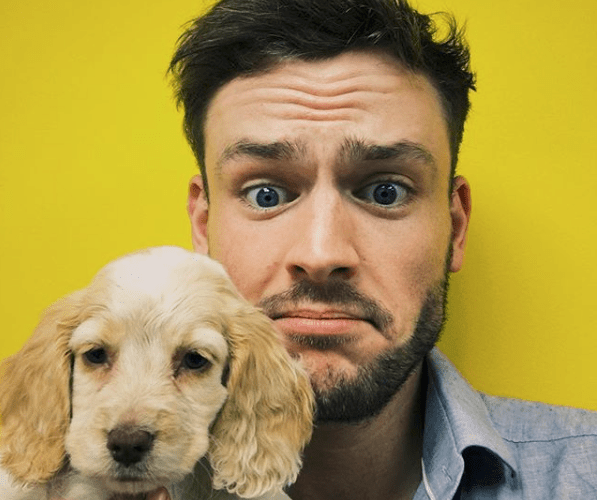 If you’re an avid viewer of CBBC or you occasionally catch Lorraine Kelly of a morning, you’ll probably recognise this very cute chap as telly vet Rory Cowlam. If not, say hello for the first time to this deliciously swoonsome Jamie Dornan lookey-likey who has whipped viewers into a frenzy with his dashing good looks and supercute love of animals. Sadly thirsty boys, he’s not a fella fancier like us (curses!), but that doesn’t mean we can’t swoon over him. In fact, he has loads of gay pals so he won’t mind our unrequited lust at all! To find out more about this super cutie, we tracked the Rory down for a wee chinwag to find out what makes him him tick.

We have loved waking up to you of a morning and catching you on Lorraine – how much has this changed your life?

I absolutely love it. I have been so lucky to get the opportunity to work with ITV and they are an amazing team!

You must have guys and gals literally throwing themselves at you?

Not quite. The occasional person has recognised me but I think we are a way off being bombarded!

How did you get involved with Lorraine’s show?

The producers approached me for a segment and it just went from there really! I think they had seen me on my CBBC show The Pets Factor, which I’ve been on since 2017.

All you daytime tele fans, keep your eyes peeled for another doggo feature this week on Lorraine… we’re talking pampering your pooch and how you can spoil them rotten! 😏 (but not too rotten 🤦‍♂️)

So you’ve only been in TV a short time then. Was life on the telly the dream for you?

Some would say I like being the centre of attention, so yeah developing a media career was always been something I had been keen on. But for me, the main thing is, it’s all tied into educating the public about animal welfare and looking after pets as well as possible!

What’s Lorraine really like – is she a naughty wee lassie?

Booo… You must have loads of showbiz pals – who do you hang with?

Everyone from ITV and CBBC have been lovely. As a vet, we have a bit of a different life to those in full time TV but I have been lucky enough to meet some amazing people. I’ve been to celeb birthday parties and a few nights out… I tell you what though, I still feel like a bit of an imposter. We were disappointed to hear you’re not a gay – do thirsty fellas try their luck with you?

Some of my best friends are gay so I seem to spend a lot of time in gay clubs in London… so yes haha.

Ever thought about swinging  the gay way?

Try everything once right? Oooh you tease! Have any of your mates come out to you?

I have very close friends who are gay but no none have come out to me.

So have you got a girlfriend?

I’m as single as they come. 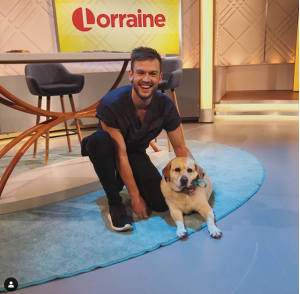 That’s a shame. Were you always a super confident guy growing up – or did you have any struggles?

I was a geeky kid with a bowl haircut so I wasn’t exactly one of the cool kids! I was bullied occasionally but honestly I’ve always just focussed on what I’m doing and I think that’s all you can do, right?

We understand there is a high rate of depression and suicide within the vet industry – have your ever experienced that?

I’ve had wobbles yes. I think it’s inevitable in high pressure industries. It’s been amazing to see increasing awareness in the industry and people are getting so much better at talking about how they’re feeling. I always find I can sort of “reset” myself with routine, some time off work and lots of exercise. Why did you become a vet – did you grow up surrounded by loads of animals?

It’s always been veterinary, since the age of four when I got my first dog. My mum tells this really cute story of when we took the dog to the vets for the first time and when we were leaving I looked up at my mum and said “I want to be a vet like Mr Benson”… and the rest is history

With the profile you have raised, are you trying to help any causes?

I work very closely with a number of charities and causes such as Streetvet, RSPCA Battersea and Oak and furrows wildlife rescue.

⭐️⭐️⭐️ #MySustainable2019 ⭐️⭐️⭐️ Okay guys, so when I was sitting down to sort my #newyearsresolutions this year, I wanted to have a massive environmental focus. It is all over the news and we are continuously told how much we need to change for the benefit of the world… so welcome to my sustainable 2019 🙌 🙌 🙌 I am going to be sharing short video snippets of my life and highlighting changes I am making to be more eco. I will look at my diet, my routine and my day to day life and highlight the little changes both you and I can make to make the world a better place. 🌍 🌍 🌍 If you have comments, ideas, thoughts… please comment on the videos and share, let’s spread the word and change the world ❤️ ❤️ ❤️ ❤️ #sustainability #eco #environment #changetheworld #letsmakeachange #makingchange #oneatatime #advice #change

You have a great body. Have you always been happy with the way you look?

I am lucky enough to be quite confident in my look. My body doesn’t bother me. But I do work out. I’m a cardio man really. I used to do weights but I get super bored. Running and cycling are my thing, you’ll catch me cycling through London more often than not!

As you’re an animal loving vet, would you ever go on I’m A Celeb and gobble kangaroo balls?

Everyone seems to be a vegan at the moment…. are you?

I’m not a vegan, though I am increasingly conscious about what I eat. I have actually been pescatarian for the last four months… the thing is if everyone just cut down on meat and dairy then it would make a massive difference to the world. So sir, what’s the dream?

I want to be a relatable link between the public and the veterinary profession and a trusted source for veterinary advice in the uk, but If I could have my way I would be travelling the world helping conservation projects and educating people on animal welfare!

What would you tell your 16 year old self?

Work hard, be kind and do your best