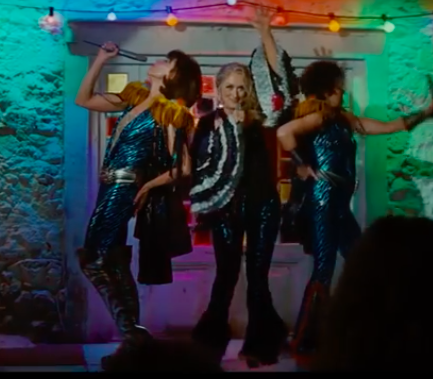 Last year when it was announced that there was going to be a sequel to Mamma Mia, we were very hesitant. After all, the first film was just perfect and had used up all the great songs.

But it looks like we may be in for a treat as the trailer for the movie has just dropped – and we are beside ourselves with glee.

While the film, due out on July 20, reunites the old cast of Amanda Siegfried (Sophie), Dominic Cooper (Skye), Meryl Streep (Donna),  Julie Walters (Rosie), Christine Baranski (Tanya) as well Pierce Brosnan (Sam), Stellan Skarsgård (Bill) and  Colin Firth (Harry), it also boasts a cast of the coolest young actors around in some flash back sequences that make up the bulk of the story.

The brilliant Lily James plays a young Donna and is joined by the gorge Jeremy Irvine as Sam, Josh Dylan as Bill and the hilarious Hugh Skinner as Harry.

Not only that Cher – yes CHER!!!! – appears as Sophie’s grandmother.

But take a look at the TRAILER for yourself