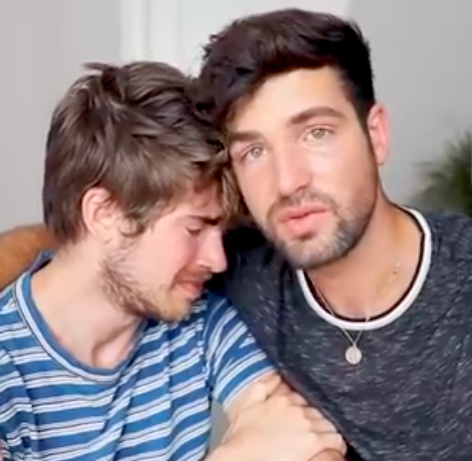 If there’s one thing you do today – WATCH THIS HIDEOUS CLIP!

Erm… WARNING! Don’t watch this clip below while you’re eating. You may puke. Actually, whether you are eating or not, just a couple of minutes of watching this attention-seeking blubfest will make those of you with the strongest of constitutions feel like hurling. A lot!

YouTube sensation Joey Graffeca and boyfriend Daniel Preda have taken to YouTube to announce – yes ANNOUNCE – that they have split up after six years of dating. Sad? Er…. No, really queasy, actually.

In what must be one of the most contrived and sickly video clips ever to appear on Facebook (Yes, even more so than that hideous James Charles apology video), the two handsome lads sob their way through a heavily edited fourteen minute video in which they explain that after six years they have decided to go their separate ways. Awww!

While in most instances, our hearts would most definitely go out to anyone who is experiencing heartbreak, when we watched this video we couldn’t help but feel that these boys were manipulating their young and gullible audience using faux tears, hunched shoulders and lots of syrupy insincere guff, making it all feel very hard to digest!

According to the clip, the blubby pair broke up THREE months ago but have had to live together during lockdown.

But for some reason, we find their heartache hard to swallow.

For one, Joey and Daniel split three months ago, so surely they’ve had enough time to get over the true pain and stop the waterworks (invisible as they appear to be). Also, during this vomit-inducing fourteen minute whine, they admit that while they are no longer romantically involved there is certainly no beef between them and will continue to see each other. So why the tears?

However, it’s the series of edit cuts that make this whole clip feel so contrived and manipulative. Instead of a natural genuine free flowing out-pouring of emotion in which they share with their fans their sad news, they have actually sat down afterwards to spool through the footage and edit it, making it feel very icky indeed.

But enough of us banging on about it. Grab a cuppa, take a seat and try to avoid puking as you watch this horrific clip!