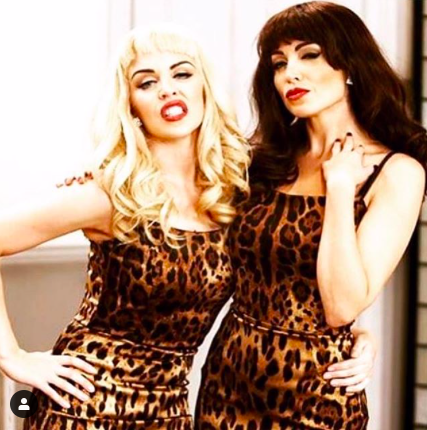 G-A-Y owner Jeremy Joseph has emotionally paid tribute to singing legends Kylie and Dannii Minogue, praising them for their ongoing loyalty to his legendary club, admitting, “Without Kylie or Dannii, there would be no G-A-Y!”.

Speaking to Kylie podcast The Diminutive Collection, the Soho legend said that the Minogue sisters’ ongoing loyalty were integral in setting up the foundations for what the club would become in later years.

When you’re offered dessert and your willpower deserts you 🍮 🍨 🧁

“Without Kylie or Dannii G-A-Y would never had had the big names that it had,” he says. “They started it all off for me. When I first started G-A-Y, we had Boy George booked to perform, but then he cancelled at the last minute. So I got Dannii to stand in for him and she did a show for us. She had such a good time and told Kylie she had to do it and that really started the ball rolling. Before that big names didn’t really play gay venues so I have a lot to thank those two girls for.”

Later, in an incredibly moving part of the interview, Jeremy recalled the night when Kylie made her first public appearance after her two year convalescence dealing with cancer.

“One of the biggest honours for for me was that the first place Kylie was seen after being ill was G-A-Y.,” he shared. “It wasn’t planned. It was just the most amazing moment. No-one had seen her, no-one knew what her health was like since she had finished treatment. We had Dannii booked in to launch her greatest hits album and we knew that Kylie was going to come. Kylie was watching from the balcony at the Astoria. During Dannii’s performance, Kylie came down to the side of the stage to watch and then after Dannii had done her encore Kylie said to me, “I’m going to go on. Don’t introduce me. I just want to go on.”

Jeremy adds: “Normally I would go out and bring Dannii off myself but Kylie walked on instead. People were so shocked to see her – it was just a magical moment. Even Dannii was shocked. You see it wasn’t just about Kylie, it was about Dannii too. After all, when someone gets cancer, it’s not just about the person who gets some sick, it’s about the family too. It was a special moment for Dannii too. I remember so well, Dannii’s face was a picture – it was pure happiness.”

Jeremy goes on to say that while Dannii might have been happy to see her sister so fit and well, the crowd were just as pleased to see her too.

“The audience reaction was phenomenal. It was like a Mexican wave,” he says. “The first row of the audience just went for it, but you could hear the cheer getting louder and louder across the theatre. It grew from he first to the back. It wasn’t just a cheer, it was an emotional cheer. It really was the most incredible moment and is something I will never forget. You see, it was part of someone’s life, a very important part of someone’s life. And that makes me realise that there are points in G-A-Y’s  history when it’s more than just a venue, it’s part of people’s lives, people’s history and people’s careers.”

Hear more from Jeremy on The Diminutive Collection where he reveals why he will never book Britney again at G-A-Y! Listen to it at SPOTIFY and other podcast carriers.