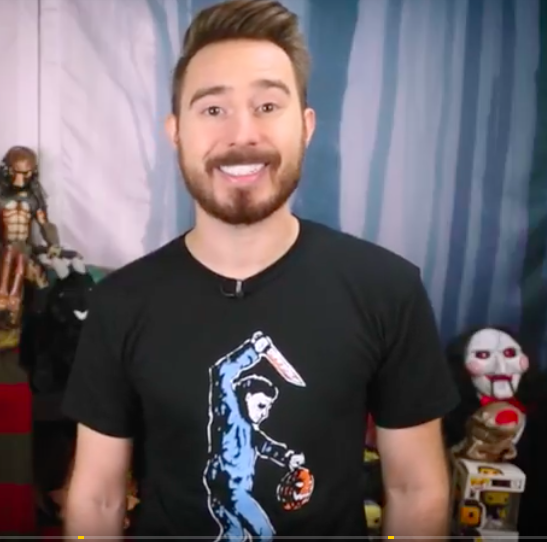 Calling all horror fans. If you like watching pretty young things getting slashed, bashed and savaged in bloodthirsty movies like Halloween, Friday The 13th and, er, Leprechaun, you need to check out the most amazing vlog on YouTube.

Dead Meat is the brainchild of the fabulous and super cute gore king James A Janisse, who every week “tallies up the kills in everybody’s favourite horror movies”. Sure, we know there are loads of other horror fans who post video clips online about our favourite movies, but very few compare to the genius and humour of James. He is laugh out loud funny. And if you don’t believe us, his 1.5million YouTube subscribers will make sure you do.

Each week, he posts a Kill Count in which he hilariously narrates the plotlines of a movie and chucks in hilarious asides over a cut down edit of the flick. After he’s taken us through the film’s action, he honours the best and worst of the kills and then flashes up a graph of how many men and women were killed. All delivered in his trademark patter.

While he clearly loves the genre, our James is not shy to poke fun at those movies that cross the line of credibility, or have terrible scripts or are just plain hammy. And that’s where he excels. Because we know he’s a true horror fan, we know that when he does get critical it’s because he’s frustrated by the decisions some filmmakers make when creating their art. Yeah, we said art. Whatever you think of Halloween Resurrection, it’s, er, art, guys!

And if you’re reading this and you don’t like horror movies,  that doesn’t matter because James’s rib-tickling reviews will have you in stitches and perhaps might even encourage you to watch the movies for yourself.

Elsewhere on Dead Meat, James posts a series of podcasts which he co-hosts with  sassy girlf Chelsea (yes, boys, he’s straight, dammit!) and has recently started including a Cut Comparison in which he checks out the differences between the theatrical and the directors’ cuts of horror movies. He also produces reports from horror-thons, theme parks and events which sees him in newscaster mode interviewing stars and fans.

We can bang on about Janes for longer, but instead why not check out his site for yourselves.