Meet the man who made THAT heartbreaking £50 Christmas film 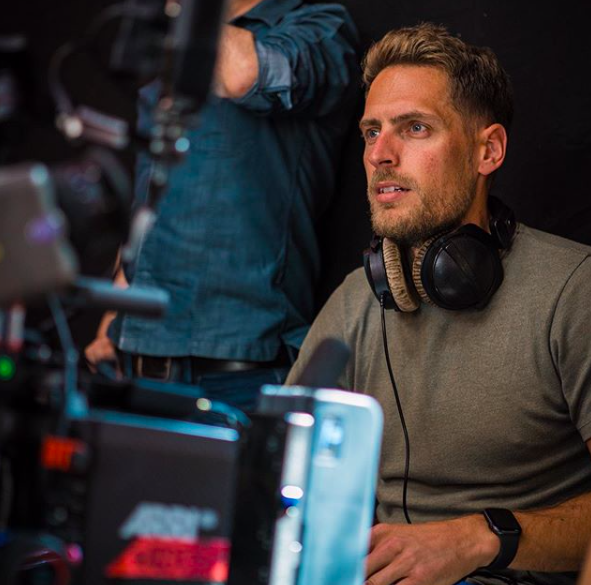 Phil Beastall is the man who made the heart breaking film about the young man listening to his late mum’s tape….

Christmas, it would seem, is no longer just a time for exchanging gifts, eating turkey and singing Christmas carols. These days, it’s all about big stores like John Lewis and Sainsbury’s trying to out schmaltz each other with festive adverts. But last year, a heartbreaking short film called Love Is A Gift appeared online in which a young man is seen marking off the days running up to Christmas so that he can listen to the last of a series of cassette tapes, recorded for him by his late mother that captivated the world. Unsurprisingly the powerful and highly emotional film went viral and has since been watched by millions of people.

As a result, the film’s director Phil Beastall was inundated with offers to produce similarly poignant clips for the likes of Good Morning Britain and even pop superstar Lewis Capaldi. And now as we approach Christmas 2019, Phil is back with another beautiful tearfest! In his latest film, Made For You, we see a gay couple in a long distance relationship keeping in touch via social media until they are – spoiler alert – reunited for Christmas. Believe us, you won’t be able to stop yourself from blubbing!

So who is the talented man behind these heart-tugging short films who leaves us sobbing? Once we wiped our tears away, we caught up with the humble genius himself to find out if he is as sensitive and sentimental as his gorgeous films would suggest.

You first got noticed when you posted your heartbreaking film Love Is A Gift last year. Were you surprised by the reactions.

I was very surprised. Especially because I originally released the film in 2014 and, although the comments I received were lovely, it certainly didn’t reach as many people as it did in 2018.

What was the inspiration for that first film?

I wanted to create a film that would demonstrate I was capable of telling emotive stories that would resonate with my audience. I was on a run and the idea came to me and I felt it would be a powerful concept.

At the time people were comparing your film to the big budget John Lewis ads. Was that part fo the reason you did it?

I think the reason people compared my film was because of the limited funds I had available to me to make it compared to John Lewis. However, the irony is that I was actually inspired by some of the earlier John Lewis Christmas adverts, directed by Dougal Wilson. The story about the boy counting down the days to Christmas so he could give us parents a gift is what inspired me to make my own Christmas film.

Two careers…one that focuses on my creative needs and the other which focuses on my need to look after my body. Both require attention but they don’t always coincide very well. . However, after last night’s immense training session with my club the Cheltenham Harriers I’m back on it again tonight (even if my body isn’t best pleased), keeping my mileage high and chasing those PBs in 2020. If I can manage this balancing act – juggling the sport I love while making films that resonate – I will be a very happy man. Let’s see what the future brings!

These poignant festive adverts have really taken over Christmas recently haven’t they? They’re kind of old fashioned and sentimental. Do you think we all a bit of soppiness during these times of madness.

I think we spend so much of our time throughout the year worrying about finances, work, fitness and so on that when Christmas finally comes around, we allow ourselves to sit back and relax a bit and enjoy the moment – both on our own and with our family. Christmas takes us back to a time when all of those things didn’t matter, when family and friends was mostly all we cared about.

Your new film Made For You features a long distance couple reuniting – what was idea behind this film?

I wanted to create a story that was filled with positivity and would highlight the importance of cherishing someone if you’re lucky enough to find the perfect match.

The @winstonswish film has been signed off. The brand film for @caronesvision is set for release very soon. The 3 day epic online promo shoot of which I directed with the help of my usual crew is going to be released at the end of this month. And lastly, next week I’ll be directing a film for @thesilverlineuk. It’s all go!!! . And yet, for some reason I look rather annoyed about it all. 😂😂😂 . 📸. @blancpictures . . #advertising #workhardplayhard #alexamini #cooke #4k #londonagency #chelteham #promo #tvspot #filmlocation #ukrunchat #tvcommercial #film #filmindustry #filmproduction #videographer #behindthescenes #shortfilm #cinematography #cinematographer #actorlife #setlife #filmmaking #filmmaker #filmmakerslife #creativehappylife #creativeminds #director #videomaker #bts

Was there a reason why you featured same sex couple?

We wanted to tell a story about love and companionship. These guys met online and found themselves unable to stop talking to each other because they had so much in common – they were made for each other. The fact that they are two men is merely coincidental. We wanted to highlight that you are free to choose who you fall in love with regardless of gender, ethnicity and society’s expectations.

A lot of your films seem to have a Christmas theme – do you love Christmas.

I do like Christmas but I think the main reason I like telling stories at this time of year is because people are more open to receiving them and is a time of year that matters to many.

Would you want to write and direct a classic Christmas movie. What are you faves?

Of course if the opportunity came about I wouldn’t hesitate to create a Christmas movie, as long as it wasn’t too cheesy! My favourites are Home Alone, Love Actually and I have a soft spot for Fred Claus.

Your filmic style is moody, beautiful with a sense of sadness – where does that come from?

I am quite a sensitive guy. I am very self aware and like to understand my own and other people’s emotions. It allows me to tap into that and hopefully evoke strong emotional responses through my work.

You did a film for Good Morning Britain about loneliness. Was that important for you to do?

It’s really important that we remind ourselves that there are people out there who may be lonely, bereaved and need some love. It’s easy to sit back and enjoy the luxuries we may have in our lives whereas others may not be so fortunate. Christmas is a time to come together and look after each other.

Just me and my monitor 😎 . First cut of the music video complete. Meeting the producer tomorrow for final tweaks before sending it off to the label. Really happy with the position it’s in at the moment 🤟🏻 . 📸credit: @nataliemartinsactress

Lewis Capaldi also asked you to shoot a video for his track with Peter Capaldi in partnership with charity organisation Live Life Give Life in order to raise awareness around organ donation. That must have been a huge complement.

When I was asked to make Lewis Capaldi’s music video I didn’t quite believe it. In fact, after the initial chat they went quiet because of the Christmas period, so I started to believe it wouldn’t happen. But then they got in touch again in the new year and we kick started the production. I remember waking up on Day two of the shoot and I couldn’t wait to get started again. It was an incredible experience and the reaction to the video has been amazing.

Is the dream to shoot a feature film?

I like telling stories in short form, or at least I do now. Creating a feature film is not currently on my radar but of course if the opportunity came about, I wouldn’t turn it down, as long as the concept and project was right for me.

Are you surprised the big superstores haven’t asked you yet to film their festive campaigns? Or have they?

I’m not surprised at all and I certainly don’t have any expectations that they will. The creatives that work on these adverts are incredibly talented, they spend months creating what is essentially around 90 seconds of content. They have a big challenge on their hands because there’s a lot of pressure to tell a good story. I’m lucky in that I’m not trying to promote a brand. As soon as it becomes a brand film the audience’s reception changes. You’re no longer the underdog like I am/was. If I was asked to direct a big brand Christmas film I would want to make sure that the story that is written is right for me as a Director.

How did you get started doing what you are doing?

Making films was quite a last minute decision. I’ve always been creative but I also did well academically. I got an A* in GCSE Maths in Year 10 and even did ICT in Year 9 and got a B. So I was originally destined for much more of a business orientated career path. However, my brother, who was in the year above, made an end of sixth form film and it inspired me to study Video Production at the University of Gloucestershire. After that I became a video editor in an agency and worked my way up to Head of Video before going independant. It’s not been an easy ride and I’m still working very hard to get our business Anzara noticed for the good work we know we are capable of.

Who are you inspirations and your favourite films?

My favourite director is Steven Spielberg. Although he’s mainstream I really like his ability to capture emotion and his use of lighting. I’m a sucker for a romcom and I also love horror.