FIRST DATES’ WAYNE: ‘I came out to my parents using sign language!’ 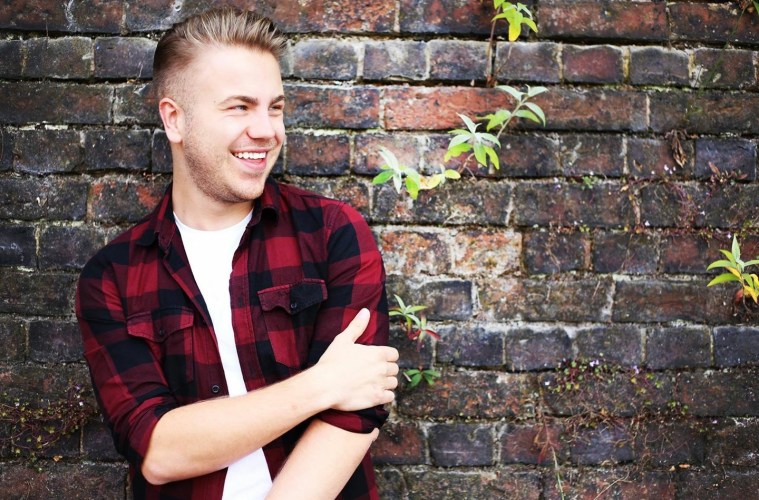 Super cute star of First Dates Wayne Barrow, 24, opens up about coming to terms with his sexuality and how the loss of his beloved nan left him in a dark place.

First Dates has fast become the must-watch show for those of us jaded with life and in need of reassurance that there are in fact nice guys in the world. Aside, perhaps, from Daniel ‘I hate camp men’ May, the heartwarming dating show has introduced us to some lovely single chaps over the years such as Mario Picariello and Paolo Delogu, and most recently the gorgeous and very smiley Wayne Barrow, who enjoyed a lovely date with freshly out Patrick.

We tracked the happy chappy down to talk about his date, what he looks for in a guy and how he managed to tell his deaf parents he was gay!

We loved watching you on the show. What expectations did you have about the guy you were going to meet and how did it work out?

What kind of guys do you go for in general in terms of looks, persona.

My friend always asks me ‘What are your three non-compromises?’ And I always reply with ‘He has to be kind (and not just to me, but to everyone around him), he has to be tall and he has to be fairly laid back!’ (I think that’s more because I have a big character, so two big characters can clash!

I’ve always been attracted to the kind of guys I just mentioned above, and also guys with a nice smile – you can’t beat a lovely smile! You came out at 14 – how long had you known you were gay? Were you angsty until you came out.

I think on some level, I always knew, it was just more about understanding what those feelings were. I think it’s one of those things that you don’t really get to understand until you hit puberty, as that’s when you start to develop feelings for people. I guess I was quite anxious before coming out, but once I did it, it was just like a whole weight had been taken off my shoulders, and I could just be who I wanted to be!

Coming out to your parents was a bit of ordeal. You say they are both deaf, so did you have to sign coming out? That must have been harder?

My parents were the last people I told, I think it was because I found it harder to tell the ones who meant the most to me. I just sat my Mum down and yeah, I told her in British Sign Language. I guess I don’t see it as any more difficult that telling her in English – telling the person you look up to and respect the most is hard anyway – right?!

You also mentioned that your granny was the one who calmed your parents down – how did she do that?

This woman was seriously a phenomenon of a lady! She always knew how to calm any situation down, and still manage to keep her opinion to herself. However, this certain situation, she shared her opinion which was just what I needed that day. She told me that I had done the right thing, and told me and my parents that I am still the same person as I was the day before. My parents really looked up to her as well, and I think that alone helped the situation a lot. Anyone who would have met her, was an extremely lucky person to have someone like her in their life!

She sounds adorable. Sadly she died on the next day.

I couldn’t believe it. I was devastated. For a while I was convinced it was the shock of me coming out to her that caused her to pass away. I guess I was the closest to her out of all of her grandchildren, and felt responsible for it. It was a real dark time of my life, but something that I have managed to deal with, and I have now accepted, even though I still miss her.

How was life at school? Did the boys give you a hard time?

I had a brilliant time at school, I was also very open. Some of the lads tried to give me a hard time, but in all honesty I wasn’t that bothered. I was still struggling with the death of my nan, that all of their jokes and behaviour seemed so petty to me. Since leaving school I’ve had a lot of the guys apologise to me for what they said.

That’s nice. What did they do to you!

The one thing I do remember, was someone telling me that they were going to beat me up because of being gay – and my response to them was that I would have really enjoyed him touching me (of course I really wouldn’t have!), and he never came near me again!

Brave! When you were out, did you throw yourself into gay life. Was it something you enjoyed?

I don’t really see a gay life any different to any other life – I think every single person has a different life, and it’s whether or not we choose to accept who we are that makes a difference. Apart from the few years after my nan, I have had the most amazing life. I’ve met some amazing people, experienced some amazing things, and I pray that the rest of my life is going to be just as exciting!

You don’t really go out on the scene. Why is that?

I do go every now and then, as I do have a brilliant night – but I don’t tend to socialise too much on ‘the scene’, only because what I have experienced seems like what I can only describe as a school playground. There’s a lot of cliques, and I get the impression it can be quite closed off from the rest of the world – I guess I like to keep a very open mind and I don’t ever want to segregate myself to one clique.

When was the first time you smooched a chap? Was the sex part of the lifestyle some thing that scared you?

I was seeing a guy that I went to school with, and I was about 15/16, and he was the first guy I ever ‘got with’, it never really scared me, as I think I knew it was what I wanted – and I guess I don’t really get scared easily!

Have you had boyfriends?

Yes, I’ve been in long term relationships and I have had my heartbroken twice, but who hasn’t? I think it’s something that almost everyone goes through, and it moulds you as a person. I don’t have any bad words to say about those two guys, as they both ended things in the most respectful way, which I could not have asked any more.

Have you always practised safe sex?

I’ve always been very cautious when it comes to sexual relationships – I have always practised safe sex, and I always will. Did you have good sex education at school? Did they refer to gay relationships .

Looking back, I didn’t really have much of a sex education, and there wasn’t anything that I can recall for gay relationships. Most of what I have learnt has been through my own research and discussions with other people. Luckily I have met some great people who have given me some brilliant advice

Aside form appearing on First Dates, you’re no stranger to TV , are you?What job do you do. How long have been doing it?

I work as a TV Presenter for Gemporia (Gems TV), where I sell jewellery to anyone who watches. I’d love to progress and do some work in the entertainment field (with idols like Dermot O’Leary, Ant & Dec, Emma Willis and Davina McCall) – so plenty of hard work on my part!

How did you land your job.

I applied for my job through StarNow, which is a brilliant platform for presenters, actors, musicians to start out with – luckily they seemed to like me and took me on!

How has life been since your appearance on First Dates?

I guess my day to day life hasn’t really changed much – the only main difference is the response from the show. I didn’t expect to get such a positive reaction, I was totally ready for people to absolutely hate me! I have been stopped on the street a few times as well – which is quite bizarre!

Have you had more attention from men?

I have yes, which is really overwhelming, guys are actually approaching me for once! I have had quite a few offers for dates, which has been really lovely.

Has it boosted your confidence?

I have always been quite confident in myself, so I don’t think my confidence has changed at all, however it has made me appreciate all the lovely messages. I actually feel quite guilty because it’s so hard to respond to each and every single person, and I don’t want to come across as ignorant!