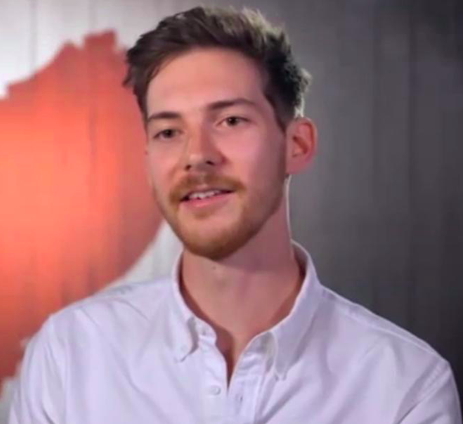 Even though most First Dates viewers were swept away by Joe and Jack’s enchanting date a while back, there were some who were more upset by Joe’s use of the phrase ‘straight-acting’? Are we being too sensitive when it comes to vocabulary? GLU editor Christian Guiltenane has his say…

While many of us were enamoured by the genuinely touching and heartwarming date between the rather lovely Jack and Joe on First Dates recently, their appearance has caused a wee bit of controversy.

When Joe admitted that he had a particular liking for ‘straight-acting’ men, some quarters of the LGBT community saw red and pounced on the fella for his choice of terminology.

One writer for Hornet.com raged that “you don’t actually have to put masculinity and femininity in the same categories as sexuality and gender”, adding, “Gay men can be masculine, and straight men can be feminine. And there’s nothing wrong with either. We actually can’t believe we have to write this in 2018, but obviously we do if blokes like Joe and Jack are getting air time on one of Britain’s most popular reality shows.”

Meanwhile another angry ‘genderqueer’ guy wrote in The Independent that “this rhetoric of only desiring ‘straight-acting’ men is surely a sign of a latent, internalised repression that has not suddenly vanished.”

Personally – and this is my opinion as an older gay guy who has lived a life – I don’t believe Joe should be criticised as harshly as he has for his comments or his desire to meet a man that ticked a certain box for him.

While perhaps the phrase ‘straight-acting’ is a little sloppy in this day and age, surely he should be allowed to express what kind of guy he is attracted to.

So he likes guys that are perceived as masculine and has an interest in football, eh? So what? That’s his preference. He’s not telling any of us who we should or should not fall in love with. Nor do I believe his terminology has anything to do with gay shame, before someone throws that old chestnut in… He is merely attracted to a guy with a certain persona, in the same way that some guys like muscle gods, while others prefer those who are a little softer around the middle. For every boy who likes a hirsute hunk, there will be another who prefers a smooth bodied guy! Each and every one of us has our own preferences and that is great. We should actually be celebrating the fact that we have so many different types of gay man to choose from. After all if we were all the same, what a boring community it would be.

When Joe admitted that he liked ‘straight-acting’ guys and that he was overjoyed to have found a fella who liked football, he wasn’t actually criticising men who mIgor be considered a little feminine. He was merely describing the kind of man that he himself found attractive. Nor was there any hint of him getting all Israel Folau about it and slating guys who we’re not masc enough for him. I fear these writers – one of whom is a drag queen who admits to suffering with gay shame – may have been a little too sensitive and have found unnecessary offence in a rather innocent comment.

But what these writers have ignored, when they wrote their worthy pieces in some vegan coffee house in some artsy part of their city, is that Jack and Joe’s appearance on the insanely popular First Dates was doing more for the LGBT community than these self-appointed spokespeople ever could.

Yes, we might live in a world where we have an army of homo faces on the telly and can hang out in lots of places where we can hold hands with our partners and be openly gay. But let’s not forget, not every gay man in the UK or other countries has the luxury of that freedom.

There are some who are still scared to come out, not because they are ashamed of who they are, but because of the fear of reactions they will get from bigots. So to see these two everyday chaps, who do real jobs, talking openly about their gay experiences and flirting and kissing on camera is an absolute joy and is actually groundbreaking.

Yes, groundbreaking because while gay people are much more visible these days, these same sex relationships are now being seen in homes where some viewers might feel uncomfortable about gay relationships. Now thanks to them watching a fluffy light entertainment show they are seeing first hand two men falling for each other. If this can’t chip away at the bigotry of those who are scared of difference, then I’m not sure what can!

Okay, perhaps ‘straight-acting’ was a lazy term on Joe’s part, but is there really any reason to destroy this poor fella for using it when his appearance on the show is only doing good? I certainly don’t think so.

What do you think about this? We’d like to you to have your say? Was Joe wrong to say what he did? Are we being too sensitive about language? Drop us a line at hello@guyslikeu.com