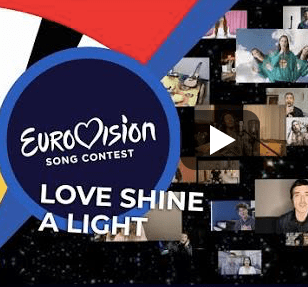 As we’re fast beginning to realise, 202o is the year that never was. Due to the Coronavirus, big events have had to be scrapped while nations across the world try to squash the curve. One annual extravaganza to fallen foul of this dreaded virus was Eurovision, that was due to take place in Rotterdam over the weekend. But the show’s organisers weren’t going to let the weekend pass without giving Eurovision fans the chance to celebrate the songs that will now, sadly, be lost in time.

In a big TV special, dubbed Shine A Light, fans were treated to clips of every song taking part in this year’s contest plus the artists sending messages of goodwill. But the highlight of the entire two hour extravaganza was an incredibly emotional rendition of Katrina And The Waves’ 1997 UK winner Love Shine A Light that was performed by every single contestant. And it was breathtaking.

The optimistic collaboration pulled at the heartstrings and has now provided the weary world with a global anthem to give us hope during this tough time.  So come-on EBU / BBC or whoever looks after the Eurovision – this song HAS to be released.

The classic track was also given a orchestral make over that gave fans of the show another reason to shed tears! Who’d have thought a Eurovision track could be so emotional.