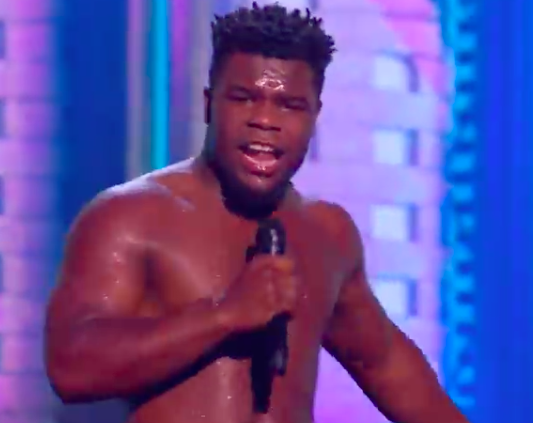 GuysLikeU is a culture and lifestyle website for young gay men…….

Hey gays, we have some amazing news for you. Former Bath and England rugby player Levi Davis is bisexual and GuysLikeU couldn’t be happier.

Back in 2019 we fell for the gorgeous sportsman when he teamed up with rugger buggers Thom Evans and Ben Foden to form boyband Try Star on Celebrity X factor. Not only was he scrummy-as-f**k, he had a voice to die for, banging out a slew of tunes like No Diggity like a pro.

This weekend, 22 year old Levi became the first professional rugby union player to come out as LGBT+ with his career still ahead of him when he opened up about hid sexuality for the first time.

In an interview with the Mail On Sunday, the beefcake explained that he had been hiding this sexuality since he was 18 and had just decided to finally open up to his teammates via WhatsApp. “I had hidden it well but I couldn’t keep it secret any longer. I had to tell them, all of them, not just a few. I didn’t want it to turn into Chinese whispers.”

In the message he sent the lads, he said:  “Hi guys. I just want to tell you something that’s been eating away at me for four years now. I want to be open and honest with you boys, as friends and teammates. I’m bisexual. It’s something I have known since I was 18.”

Thankfully, as this is 2020, his teammates were accepting lads who were overwhelmingly supportive of him. Bless.

“They began taking the piss in a good-natured way, which I was relieved about,” Levi said. “If they had been too tender-hearted, I would have been worried. I’m still a rugby player, after all!”

Mid workout and this banger comes on. What a rockstar my grandma is, when I was little I used to get recognised just for being my grandmas grandson and she would always and to this day stands at the front of church rocking out, when I was young it was embarrassing, but now I obviously know how much of a legend my grandma is, so this is me immitating her 😂 #MAVISDAVIS #whatyougonnadoactafool #fitness #workout #iso #living #Thelelife

In the months leading up to his admission, Levi admitted he’d stayed in the closet for a long time because he felt “a sense of shame” and “as though I’m not normal”.

In an effort to suppress his feelings he “over-compensated” by sleeping with a succession of women. “I felt I needed to be this macho man, which I still am, but it felt like I needed to reinforce this more,” he said.

However, stifling his feelings for months led Levi’s mental health to begin to deteriorate and he turned to heavy drinking to get through the dark times, which affected his performance on the pitch.

But now the talented fella is happy to be out and proud. “I want to be open and honest with you boys, as friends and teammates. I’m bisexual. It’s something I have known since I was 18.”

He says he is particularly keen to encourage young guys like him to feel confident enough to be true to themselves so that they’re not driven to the edge. “Thankfully we can now discuss mental health more openly,” he said. “And in the same way, I want people to feel that they can be who they are and that it is OK to be who they are. Hiding who you are can kill you – and has killed people.”

Now, free of any secrets, Levi says he is taking each day as it comes. “I don’t know yet where I am going, but by talking I can walk hand-in-hand with whoever I want and it won’t matter any more because it’s out there,” he says, adding that other closeted players should make it easy on themselves and just come out.

“Just pull off the plaster and do it. There are definitely others out there in rugby. At this moment in time, I feel so free. I am really, really happy that this is coming out and I can be myself.”

Welcome to the club Levi! Life is only just beginning.