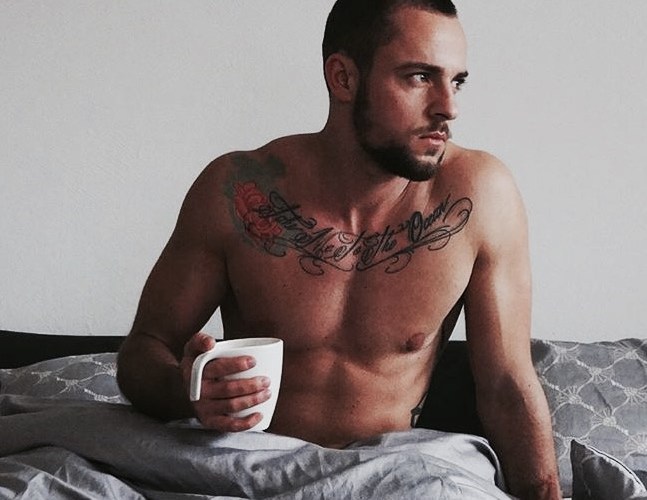 GuysLikeU regular contrib Hadley pays tribute to the incredibly gorgeous Benjamin Melzer, the first trans model ever to appear on the cover of Men’s Health!

Benjamin Melzer has been catapulted into the media spotlight, with his story being printed in several different languages across Europe and further. So why is it that Germany’s Men’s Health cover model is getting so much attention? Well apart from his eye-catching athletic build, which many men would aspire to and is the envy of many more, Melzer will be the first trans man to feature on the cover of the magazine.

Melzer was originally spotted after entering into a cover model contest and says that he now wants to use the publicity he is receiving to give hope to other trans people.

✖️ DEM BOYS KILLIN' IT ✖️Stay tuned for the collectors edition of @menshealth.de magazine and find these awesome guys on the cover 😎 I'm more than proud to have the opportunity to be part of this! Thank you guys, I'll never forget this mind blowing day in my life and much love to all my beautiful followers and your support! #proud #meinCover #menshealth #fit #fitness #fitguy #beautiful #people #ftm #ftmmodel #transgender #transformation #staystrong #motivation #instagood #inspiration #believe #trainhard #workout #focus #germany #hamburg #powerful #strength #staystrong #training #covermodel #love #life

Of course this is extremely positive for anybody who is struggling with their gender identity, as Melzer’s story once again brings trans issues into mainstream discussion. Trans people who have spoken publicly about their stories have often mentioned that there were no trans role models for them to look up to. With others simply saying that nobody around them ever talked about trans men and women.

Personally I admire Melzer for speaking so openly about his journey, given that we still live in a society where trans people experience prejudice, discrimination and violence. Melzer will certainly become a role model to so many trans people, who may be experiencing similar challenges that Melzer went through earlier in his life. Although not every trans man will aspire to become a magazine model, Melzer’s cover photo will provide them with the reassurance that they are not alone in their journey.

Further to being a role model for the trans community, I believe that Benjamin Melzer is also breaking new ground when it comes to the readership of Men’s Health. Having a cover star who happens to be trans will doubtless bring about awareness of trans issues, to an audience that may not necessarily be exposed to these issues.

Melzer said that he just wants to show people that trans men are ‘just normal guys’. The April issue of Germany’s Men’s Health will go some way to dispelling any misconceptions about trans men amongst its readers.

It is often asked if people should be so open about their sexuality and gender identity. With some criticising people who find themselves in the media spotlight for their openness. Speaking as a gay man, I can still remember which celebrity came out at the time I was thinking about coming out and how that made me feel. Never underestimate the power and strength that ‘public’ coming outs can have upon LGBT people. Let’s not revert back to a time when LGBT issues were simply too taboo to be discussed in public. Nor should we be silencing the voices of inspirational LGBT people who clearly want to make a difference amongst their LGBT peers.

Benjamin Melzer is just one of the many people providing hope to LGBT people across the globe. Yes he may become a role model for trans people, or he may simply educate people about trans issues. But by sharing his story, Melzer is showing us how to be proud of who we are.