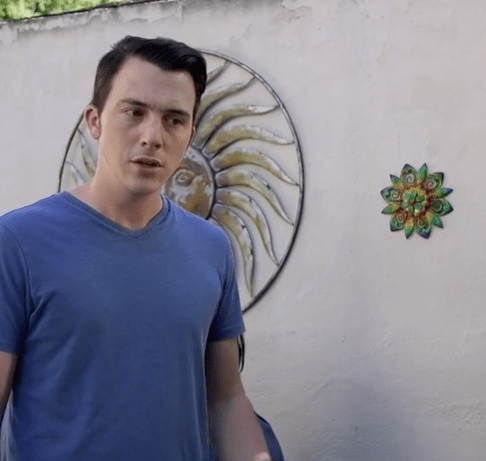 Bored of watching reality shows where people can barely string a sentence together? Yes, we are too. So boys, perhaps it’s time to look further afield from your telly boxes and check out some of the most exciting programming around on online. Yes, it seems to be the place where young LGBT filmmakers are excelling, producing some fantastic web series that will strike a chord with you.

A while back we chatted to the uber talented Ken Arpino and BJ Gruber‘s about his hilarious series The Queens Project,  but now we have stumbled across a new web series that we’ve got super excited about.

Coffee House Chronicles is writer and director Stewart Wade’s heartwarming collection of two-hander tales about gay guys’ lives. In episode six – Jail Bait – we meet two fellas who have linked up online. However, when they meet, Dan (played by GuysLikeU regular Nicholas Downs) realises that his date Owen (Hunter Doohan) is not the 25 year old he said he was! Ouch!

We caught you with Nicholas to chat about the episode and whether or not he has ever been fooled by a date!

Jail Bait is a story a lot of gay men are familiar with – online dates not telling the entire truth. Have you ever experienced anything like this yourself?

I have actually experienced situations where people have not been honest about their age. In fact I was in a two year relationship a long time ago where the person lied about their age to me, by about 10 years. We even celebrated birthdays together and he kept up the charade. It wasn’t until after we broke up that I found out the truth. The funny thing is, the age difference would never have been an issue with me. It was their own personal issue. In Jail Bait my character Dan has a go at the other character about lying about his age but then we find out that Dan is doing the same exact thing. So lessons are learned on both ends. The episode highlights – as did your film Is It Just Me? as well as CatFish – the fact that people you meet online might not be as they seem. Do you think online dating is a good place for guys to meet each other or do you think it encourages people to tell lies.

I think it can be a mixed bag. Technology as a whole can be, and is, a really powerful and wonderful thing. When it comes to communicating online it has really made the world a smaller place and people can communicate and contact each other so much quicker and easier.

The draw back is that we don’t always know who we are really talking to. And we can sometimes put things out there that we feel are safe and secure, but if we don’t know who those other people are we don’t really know what will be done with that information. I don’t think ‘online dating’ necessarily encourages people to lie but rather I think it gives dishonest people immunity to do so. They don’t have to deal with the other person face to face, at first, so they feel they are somehow allowed to be less honest. I think the anonymousness of being online just accentuates that.

But there are good people out there too.

There are honest people online who just want to meet new people, its just unfortunately, there takes some ‘weeding out’ of the others to find them.

Your character Dan points out to Owen that he’s lucky that he wasn’t a psycho. Do you think guys when they are feeling saucy lose all sense of reality and put themselves in danger?

I think that getting saucy by means of alcohol or other means to the point where you lose control can be dangerous. I think it can tear down walls of inhibition, which is not always a bad thing, people tend to speak more of their truth, but there’s a line that can be crossed. Self-monitoring when it comes to ‘getting saucy’ can be hard to do, especially when you’re having fun but it can also keep one from making a mistake they might regret. I guess it’s lucky for Owen that he was only drinking coffee.

There have been many horror stories over the years about people hooking up with guys online only for them to be gay bashers, or weirdoes. Do you think guys need to be more cautious about who they meet? Are we too trusting? They are strangers after all.

I think those situations where people are lured into trouble are horrible and frankly quite scary. But like anything, we can’t let that stop us from talking with one another, making new friends online, etc. I just think we need to be smart about it. Meet someone in a public space like in the episode Jail Bait.

When you were 17, were you naïve about gay sex and men and how to find that special one?

I just had very little experience at all really. I was a farm boy from Iowa, still finding my way. I didn’t start to find myself until after moving to Los Angeles. 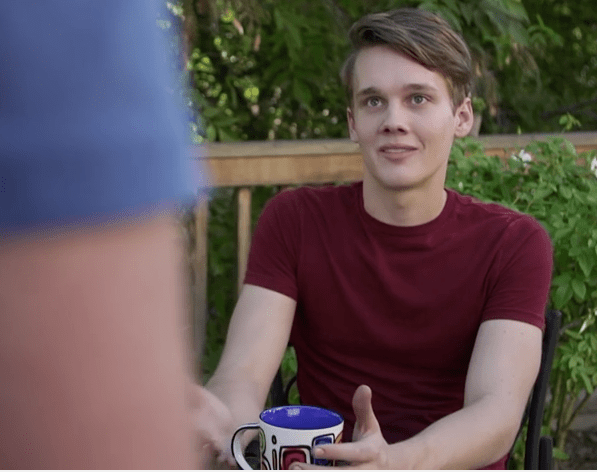 Do you think 17 year old gay guys are so much more savvy than we ever were when we were 17? What differences do you see?

I think they have many more resources and media now plays a much larger role in their lives. There are more ‘real’ gay characters in films and on TV now than before. They can now see themselves reflected in a more positive way. That does not mean there are still not young people who need support and guidance. Some are still told they shouldn’t be who they really are. We have made such great progress as a society and that’s to be commended, but we have to keep moving forward because as we see sometimes there are those that try to move progress backwards and in the wrong direction.

Do you think younger gays have lost that sense of innocence, that everything is on a plate for them or that technology has taken the romance out of meeting guys?

I think that texting and other social platforms have put us in a place where things can be misinterpreted more. I mean, I will get a text and I can honestly say I don’t always know the person’s intention or true voice. It’s words on a screen, so I think that kind of communication can lack real emotions and moments. There’s nothing like a real face to face contact. It’s hard to not just be, you. In Jail Bait at least Owen met Dan face to face eventually, so it was hard to not just be honest. And as it plays out, they had to be, no more screens to hide behind. 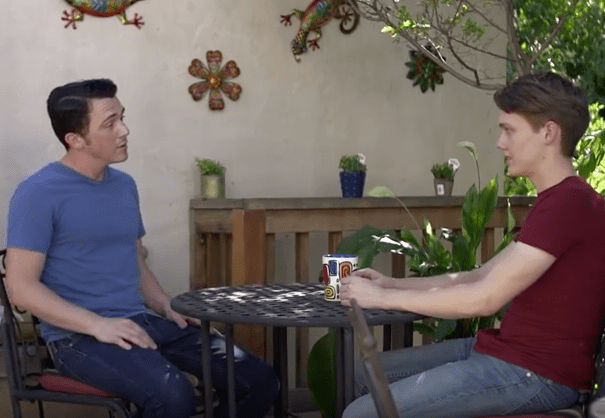 We live in a world now where sexuality seems so fluid – people are more open about being gay or straight or interested in men and women. Do you think there is more to achieve, in America especially?

I think that people are feeling more open and free about who they really are and how they really feel. I think as we continue to give people permission to just live, the more we will see people just doing that, living.

So Donald Trump and Hillary Clinton are on their election tours – Hillary has said in the past she didn’t agree with gay marriage while Donald, in spite of his other views, has shown support of gay issues. Are you worried about either of them coming to power?

I think as it currently stands Trump is not supportive of the Supreme Courts ruling for marriage equality. He says, ‘well it’s the law of the land so that’s that’. But that said, he jumps back and forth so frequently on his positions I would worry about him in the White House. Simply because I would have no idea what he would do from one day to the next. That uncertainly is disturbing and very frightening.

Your character also makes a point about safe sex and hook ups… What advice would you give young people about throwing themselves into that world?

Just be careful, don’t believe a ‘stranger’ just because they say they are clean or have been tested. There are ways to have fun and still be safe. Most people have instincts and if they just stop and listen to them they will lead them in the right direction.

When you were approached about the series, what made you sign up?

I had known Stewart Wade and Alan Reade and their work and wanted to connect up with them on a project that fit. Once I saw them doing this fun web series, Coffee House Chronicles, I thought perhaps this could be a match, and it was. They both are great guys and awesome to work with. I’m looking forward to finding another project one day to do it again with them.

What’s next for you?

I am attached to a few feature films that should be shooting over the next year or so. I’ve written a couple screenplays, with the hopes in having them made into films one day, starring yours truly. I also just shot a day on a fun comedic feature film called, Vikes.

Find out more about Nicholas Downs HERE, and check out our interview with him and his husband HERE

Get in touch if you have experienced any CatFish type deceits whilst online dating by emailing hello@guyslikeu.com