‘The idea being perpetuated that being camp is shameful is very damaging!’ 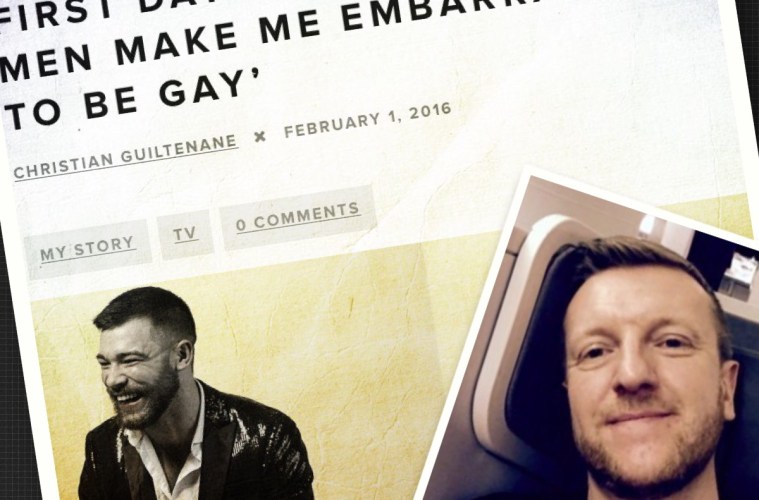 GuysLikeU’s regular contributor Nick Smith says that First Dates’ star Daniel May’s controversial comments about camp men took him back to a time when he felt felt fear and shame about being gay.

Having spent a lot of my time in secondary school fending off physical and emotional attacks for being effeminate or camp, I read an interview with Daniel May from a recent episode of First Dates on this very site that left quite an acerbic taste in my mouth. The headline of said piece was him saying ‘Camp men make me embarrassed to be gay!’

This is a rather hot topic at the moment with the recent masc4masc shunning of femininity in the gay community on hook-up apps and, gasp, IRL. Judging by the response on social media following the story appearing, it whacked that hornet’s nest with an sledgehammer.

One thing that really struck a chord with me in the piece was that when I felt most fear and shame about being gay, one of my survival techniques was to become more masculine. I engaged in more sport at school, I’d be more rebellious and would do daft dares like smoking grass (actual grass not marijuana. Yes, I was that naive!).

I found when reading the interview that I saw shades of this in what Daniel May was saying. There were some things I could relate to like being attracted to wrong’uns, but I think the hopefully intended humour in his remarks about the awful denim shirt his date was wearing and wanting to be knocked about in the bedroom were extremely overblown. It is almost like his definition of masculinity is also skewed.

I remember watching the show and my biggest issue was that Daniel said that something about Paolo was not normal. Although he did apologise and corrected himself like a disgraced politician would in the Commons, I think we got a taste of what his feelings were on the matter that were fully explored in his interview he did with us yesterday.

Had I been in a similar situation on the date, I would’ve probably just said that I didn’t think there was a spark or a romantic attraction. Then again, I’m more polite than I am brutally honest, but I do consider others and their feelings usually above my own and I think the situation was handled rather tactlessly.

I’m not sure what you all thought, but in the show Daniel comes across as quite a camp man. He’s not Larry Grayson on the camp barometer, but he certainly has some Miranda Hart mannerisms. Not that this is anything to be ashamed of. I think his message of not being attracted to camp men, which is also fine, is totally misconstrued with some of the comments he makes in the interview. Had this been the end of it, I don’t think it would’ve caused such a stir, but I’d like to think his seemingly entrenched views are more flippant than deep rooted.

Now, if Peter Tatchell can make a U-turn on the gay bakery couple and allow them freedom of expression, we should also see that at the heart, this man just doesn’t find camp men attractive. His constant exemplifying will only serve to get him in deep waters, but we do unfortunately live in a society of extremes and embellishing.

What I disagree with is this notion that ‘I’m gay because I fancy real men!’ There are many different types of gay men. While I don’t agree with Daniel’s comments, I didn’t relish the idea of attacking him for his preferences or viewpoint. What is damaging, however, is the idea being perpetuated that being camp is shameful or a scourge on gay men. This was very damaging to me 25 years ago at school and it’s still damaging to anyone in a similar position now. Besides, we all know that the new Rihanna album is far more shameful.