Simon Dunn: “When I returned to Australia, I saw a doctor for depression” 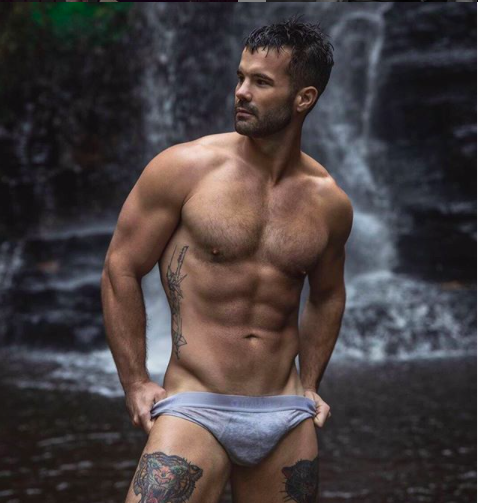 Simon Dunn opens up about how hard it was to settle back home in Australia, how he feared for his family’s safety as bush fires gripped the country and how life has changed as Coronavirus wreaks havoc across the world.

When gorgeous athlete and heartthrob Simon Dunn returned home to Australia almost a year ago, he never expected his life to be turned upside down as much as it was. Not only was he forced to leave his boyfriend Felix behind, he also plunged into a deep depression for which he needed to seek help. Then just months later, Simon feared for his beloved family’s safety as his country was savaged by hellish fires. Now, like the rest of us, Simon is trying to adapt to self-isolation as Coronavirus. Here, GuysLikeU’s favourite bobsleigh athlete opens up about how life has changed in 2020, how he’s been reunited with his love and why he’s marrying another man in a pop video….

So you’re the star of a new pop video. We can see you have soem acting skills?

I remember when I chose to study drama in school, there was only one other boy in the class who clearly selected it to pick up girls. As my school had a hyper masculine culture it was canceled after two weeks. So when I was given the opportunity by Greg Gould to have a starring part in his music video, I jumped at the opportunity. So I guess I’m only now getting the opportunities 15-year-old me wanted. Greg’s videos generally focus on social issues, and the topic of this one – a rejecting not accepting that her son is marrying a black man – is something that needs to be discussed as it’s still happening to people every day.

What an honour to have had @greggouldmusic trust me in my first acting gig, allowing me to begin this new chapter with a starring role in his music video for “Love like this” on his album which debuted at #1 , 1998. I’ll be sharing the video tomorrow #nervous

It must have been very emotional to film.

Some of the scenes were very tough to film. The scene where my mother kicks me out brought back a lot of memories. Both myself and the actress playing my mother were shaking and some of the crew were in tears. As for giving me any ideas about getting hitched – I think one wedding this year is enough!

FORGET JOE WICKS – MEET THE SEXIER PT WHO CAN GET YOU FIT DURING LOCKDOWN!

So how are you romantically these days?

My boyfriend Felix has finally moved to Australia after 14 months long distance. We had to rush him here before the borders closed with corona virus so that whole order was stressful. The government gave us a 24 hour warning.

You’ve been back in Australia for a long time now – how has being home?

It’s always good to go home. I’d left Sydney in November of 2013 so I’d been away from home for almost six years. I lived in Calgary and London and they felt like home for me. I think you leave little parts of yourself and memories every place you live. So home for me now is a few places. But being back in Australia is great! I  have finally got to spend more time with my family and that has obviously been a highlight for me. I missed a lot of my niece and nephew’s lives. So it’s good to get the chance to have a part in helping them grow into the best adults they can be!

Contrary to popular belief, I do actually own and wear clothes. I just prefer them wet! 📸: @lukeographyau

What do you miss about the UK?

It’s cliché but I miss the friends I’d built over the two years there. I know in this day and age with social media its easy to stay in touch but nothing beats just sitting down with your friends having a beer and chat. I miss that most!

And what are you doing with your life? Have yo had a career shift?

I wouldn’t say I’ve changed careers. I’ve always been someone who’s willing to try every opportunity that may present itself. This is no different, perhaps one day I’ll find one that I’m actually good at and make a career of it!

If I’m going to climb down a cliff in the pouring rain, stand half naked in cold, dirty water for over an hour. I’m going to post every single photo I can from the shoot. Because I deserve the likes! 📸: @lukeographyau

We notice you’re still training hard – has that kept your mind fresh?

Training is my escape. When I first moved back to Australia, I had to see a doctor about anxiety and depression, which was diagnosed as adjustment disorder. Because I am an athlete, his first suggestion was to get back training. To start with I had to drag myself out of bed, but the normality helped a lot in getting back to a happy place.

That’s good to hear. Australia has had a tough few months. Did the horrific fires effect any of your family?

My poor country. We’ve had around eight months of difficult times from fires, floods and now coronavirus. My family live in the country so they were constantly threatened by fire. At one point, the fires got to within 500 metres to their house. I spent most weekends down there helping keep my nephews entertained.

It appears my Instagram will have a lot of waterfall content over the next couple of weeks 📸: @lukeographyau

And now we have coronavírus – how are you coping??

My personal training business started to slow down from January, as people started to get worried about the risk. Gyms were one of the first places to close here so I was out of work pretty quickly. The first few weeks were tough mentally for me, but it’s given me time to reset and plan my next step.

What have you learnt about yourself during this very strange time?

I’ve learnt that I shouldn’t expect myself to face challenges on my own, that it’s okay to ask for help. I’m a very proud person so asking for help has always seemed to be a weakness, when it’s actually the exact opposite!

I hope they washed the curtains after this shot 📸: @jphotography91

Have relationships changed around you?

Coronavirus has meant we can only see the people we live with, it’s weird not being able to catch up with friends and family. I really want to visit my mum but she’s high risk and lives a few hours away. I couldn’t justify that as exercise when asked by police!

Has it given you enough time to re-evaluate your life?

It has, its given me the chance to re-evaluate, re-plan and rest. I think its CV’s silver lining. I’m in the process of working out what’s important and what I really want in life. I’ve had a few set backs over the last couple of years which have meant I’m starting from scratch again. This is no different.

See Simon in the video for Love Like This by Australian star Greg Gould. The track is featured on Greg’s duets album 1998.