Simon Dunn (and his pants) fight for equal marriage Down Under! 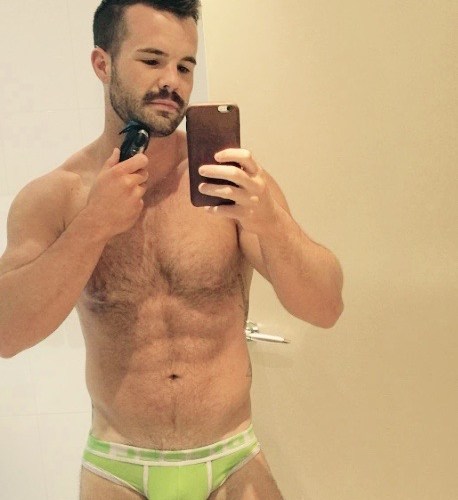 As we all know, our favourite bobsleigh star Simon Dunn has popped back to Australia recently for a good ole catch up with his family and to enjoy Sydney Mardi Gras.

But it’s not all been lounging around on the beach, sweating over a barbie! He’s also been busy working his meaty butt off and trying to bring about political change.

Not only has he been stripping off and showcasing that luscious bod of his for a sexy photo shoot (er, nice fake tan, Simon), he is also backing the campaign to get same sex marriage law changed this year!

In a recent open letter to the Oz Prime Minister Malcolm Turnbull, our Simon wrote:

‘I’m a stern believer in the idea that my sexuality shouldn’t stand in the way of achieving my goals. I’m a bit old fashioned in the sense that I would one day love to have a husband, kids and the white picket fence. That is the Australian dream after all. Yet in Australia, the country I love and represent, my sexuality stands in the way of me ever doing this.’

The outspoken sports star went on to criticise the PM’s decision to spend a whopping $160 million on a plebiscite (a vote by which the people of a country express their opinion for or against an important proposal) to get approval from the whole country on an issue which only directly affects a small section of the Australian community, describing the move as ‘an unjust waste of tax payer’s money’

And should law change in May, ‘single and ready to flamingle’ Simon has already got his future all mapped out, admitting: ‘I can’t wait to get married and when I do it’s definitely going to be a beach wedding for me. I grew up by the ocean so I wouldn’t have it any other way. And kids? Kids have always been a dream of mine, ever since I was a kid myself. I’m determined to not let my sexuality stand in the way of my dreams. I think I would be a great dad!’

And who are we to disagree???