Wanna get your hands on these Bearded Brutes? We tell you how! 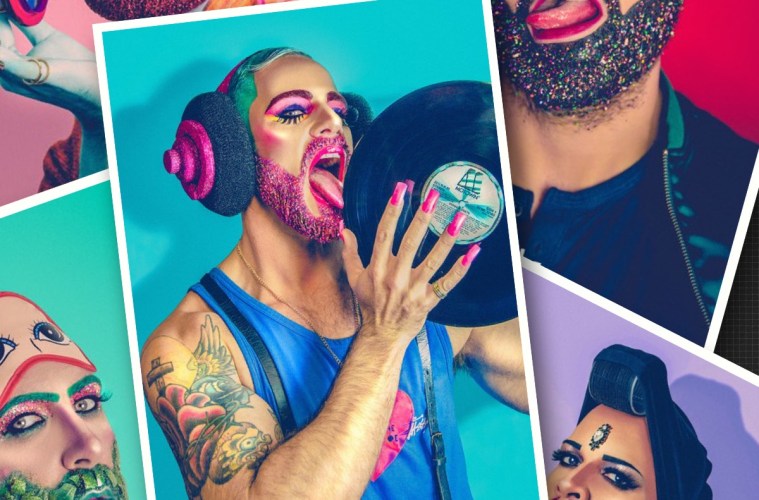 Who doesn’t love a man with a fine and full beard? There’s something just so… hmmmm about them, don’t you think?

But cop an eyeful of the fancy face fuzz showcased in these pictures, and you may never be able to look at one in the same way again.

These stunning pop art images are part of a collection of avant garde portraits called Bearded Brutes, which have been produced by Manchester-based artist and photographer Mark Leeming.

Wanting to explore male gender identity, Mark persuaded a bunch of hairy Marys to pimp up their beards for the camera. And the results were simply astonishing.

We caught up with the super talented Mark to find out how he dreamt up such an eye-dazzling concept and why he hopes his pictures will make the world a slightly happier place. Awww!

Mark, your pictures are amazing. So visual and full of vibrant colour – what’s the thought behind the collection?

Thanks. I have really really enjoyed creating these so far. It started as a very small series of images in November last year. I had seen a few guys sporting glitter filled beards on the internet and Instagram and just loved them. I liked the idea that it was allowing a lot of males to experiment with drag while still maintaining some of their masculinity. I have many friends who are hooked on Drag Race and love to be around the drags on nights out, but these are predominantly gays or girls. I found it so refreshing that more and more archetypal guys were wanting to experiment and delve into their more femme side. With this in mind I started to create a series of Bearded Brutes. Everyday men, not models, who could express themselves through the medium of makeup and glitter. I wanted the collection to push on those sometimes ‘set in stone’ boundaries and stereotypes that men should be men and women, women. To me this is bullshit, and this was made even more apparent to me when I started hanging out with the Manchester Queens. Each year I hold a charity fundraiser for George House Trust, (a charity very close to my heart) and I am incredibly lucky to get support from some of the well known drags. I just soaked up all their creativity, passion, ingenuity and all round zest for life. They don’t give a shit, they just live for it, for their art and it’s made me so much more appreciative of being able to produce art like this. There is a really creative fire in my belly at the moment.

What was your inspiration?

I am first and foremost a freelance photographer by trade and although I love my job to death, and am very fortunate that I do, I love to break away from time to time and just have no boundaries. When you are shooting commercial work, be it food, hospitality and even portraits for a client, there are always dos and donts and more often than not a fairly strict brief to follow. That comes with the territory, and I have learnt over the years that is just the way the industry works. When I do personal projects like this one my mind just runs amuck, off the page. Well, we all need to do our own thing from time to time.

The inspiration for these came from wanting to produce something that when you walk into the gallery and see these on the wall you just go ‘oh my’. I wanted them to be bursting at the seams with individuality, colour and personality. They have a pop-art kitsch feel to them, which I love. The world has become such a dark dangerous place of late, I wanted to turn the light back on. How did you choose your ‘models’?

My ‘models’, god some would kill me for calling them that, are friends, friends of friends and some total strangers who have messaged me expressing an interest in becoming one of my eclectic 20. I have had requests to fly over to Canada to do a portrait and also France and Australia. If they are paying, I’m flying.To some it might seem like the brutes have been picked at random, but I assure you this is not the case. I have two proviso’s for posing for me. 1) you are ok with being sat in a chair for hours until ur ass goes numb (CJ’s pic, the makeup took 4 hours), and 2) you are passionate! All the guys who have modelled for me have had an absolute blast and that is half the struggle in achieving a good shot. If your model’s not into it, neither is the end result.

Did the guys have any input in the styling of their pictures?

They did. Some more than others, but I wanted to create each image as a totally different personality. I often asked a series of questions before a shoot, from their favourite colour, to what movies they liked, favourite era in time etc. I then added my own style and vision to each. It’s bit of an art baby I guess! Merging two creatives as one.

Did it cost a lot of money to produce?

Surprisingly no. I did a proper beg, borrow and steal for some of the photographs. When I decided that I wanted to do a larger series I realised that budget could be a problem so I became very thrifty and inventive with them all. The Kimono in CJ’s is his own, the medusa hair used in Rob’s is just kitchen foil and the giant headphones in Anthony’s are large brillo pads with coke bottle ends glued to the ends! All that Blue Peter watching as a kid is finally paying off!

Going to back, how did you start out?

Well, I studied Art and Design at college and then Film and Media at University. I have grown up in a very creative field and always surrounded myself with a creative crowd. I was a total film geek growing up and still am now I am proud to say. I get much of my vision & style from film and fashion. I adore foreign cinema especially French, the works of Jean Pierre Jeunet and Marc Caro and the fashion maestro that is Karl Lagerfeld. I worked in the fashion industry for around 10 years firstly owning my own jewellery company then working for a retail chain for six years. Keeping costs low and in house I used to shoot all the models and jewellery and became quite handy with the camera. It took off from there really, I have a real thing for framing places and situations with my eyes. I am sure if you cut open my skull there would be a spool of film where my brain should be!

Were you supported at school or were you advised to think about a ‘real’ job?

I had an amazingly eccentric and talented Art tutor called Mr Wood who I just loved. He was always wanting to push me further and get the best out of me. He used to brush his teeth over a bucket of water after each meal in the studio and would only play Classical music and Kate Bush when we had classes. I wanted to do both Performing Arts and Art but was told I couldn’t. I did both. I ended up doing my art class during my lunch hour for the whole year.

What was your big break?

I am not sure I have had it yet!? The work to date that I would probably say I am most proud of however is my photographic and film work for Hotel Gotham based in Manchester. I have been the resident photographer for the past 2 years now and have shot and documented it since it was a crumbling plaster shell. I have created some truly cinematic imagery and film all set in the 1920’s era, it’s allowed me to manifest a world filled with interesting characters and back stories which still filter through the hotel now. I have a great tale to tell for them this year going forward with promotional material, so should be a blast. To get the Brute Love around the world. I am applying to the Arts Council for a Grant For the Arts so that I can create large format prints and hopefully have a travelling exhibition. I would love to see it influence new artists and promote more guys to express themselves. Being a brute isn’t about being gay, it’s about having the confidence and freedom to be whatever the hell you want. Since creating this collection of art, I have kind of caught the bug and am already outlining plans and testing the water for the next series of images. They won’t be brutes, they will be something different, more cinematic and dramatic. But let’s face it how much more dramatic can you get than a man sporting a full on glittered beard licking a Diana Ross 12” LP?

To see the entire collection of pictures or if you want to snap up any of the images to brighten up a boring wall, head to www.beardedbrutes.com or follow them on Twitter!