Out of the closet: Meet Jules T-Smith, the amazing designer who will light up your wardrobe 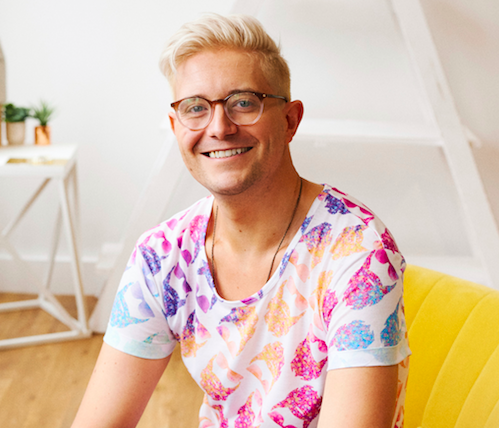 How many times have you bought merch from a live show and thought, “Jeez, is this the best you can do?” While our favourite stars might be great at putting on a big budget show, it would seem in many cases that when it comes to releasing their spin off materials like T-shirt, mugs and what not some just don’t have a clue or don’t seem to care. So hoorah for the amazingly talented Jules T-Smith, a former film producer who has turned fashion designer to create a supercool line of sassy pop culture T-shirts, mugs and even shoes that has had everyone falling over themselves to get their hands on them.

Since then, his rep has reached the ears of the right people as massive clothing chain Primark have snapped him up to design a range of T-shirts especially for them! So keep your eyes peeled when you stalking those bargain threads! We caught up with Jules to find out how he got started and how Primark got involved. 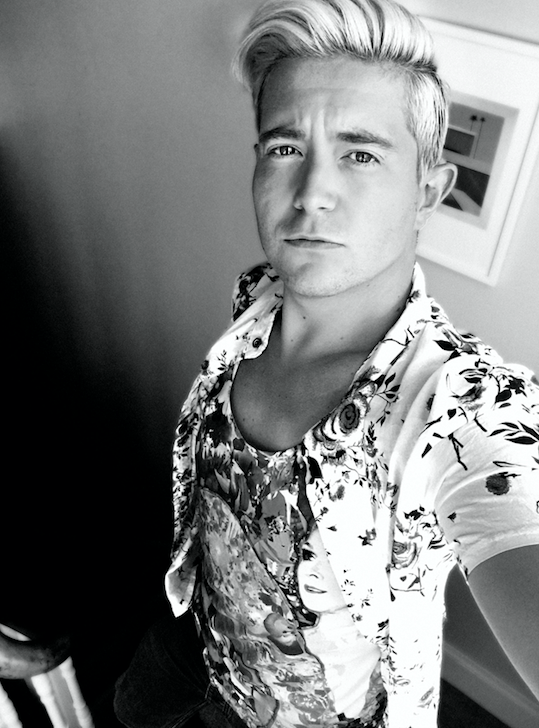 Binge Designs is a brilliant idea. When did you launch it? What inspired you?
I launched Binge originally in America through another website in November 2015 but discovered that the majority of my customers were based in London.  I think my designs hit more of the UK fashion scene than Missouri. I launched Binge UK in March of 2016.  I’m inspired by really bold prints and colours which I think a lot of high street retailers forget about when it comes to men’s fashion.  Of course there are the expensive designers who do experiment with colour but who can really afford £300 for a t-shirt?  I also produce homewares and art prints so if my designs aren’t quite right for your own fashion tastes you might like to hang it on your wall or decorate your sofa with them.

How did you come with the idea?
I’m obsessed with pop culture and the majority of designs available were just cash ins on popular titles featuring a basic logo.  I wanted to create fashion that a fan could buy but also wear on a night out and not just to slouch around the house with. Was it hard to get started?
As with every small business it takes time.  I started off doing around £200 of business a week to a very niche audience but slowly over time the popularity has grown.  What I love about my customers is that by wearing one of the designs they make a statement and also create a talking point.  People want to know where they’ve got their T-shirt from and that is my biggest generator of new Bingers.

What were you doing before this?
I used to be a film producer but I’ve always dabbled in graphic design.  I used to have a company that designed movie posters for boutique film agencies.

Was fashion always of interest to you?
I’ve always loved playful fashion.  There’s something about it that makes me smile.  I think all the things in your life should make you joyful and I like to design prints that bring me joy.  If someone else likes them and wants to buy them that’s a bonus.

How do you choose your stars?
I never do a design based on someone that I don’t love or don’t have some sort of connection to.  Some of the inspirations can be a little more acerbic than others – but only ever in a playful way.  For example you’ll probably never see a glamorous Mariah print in my collections because she’s just not my thing. However the latest meme of her not caring about her dance routine might make an appearance at some point.  I try and stay topical so if something’s happened in the pop culture media I’ll try and jump on it because I bet it’s made someone else laugh apart from me. What time does your day start?
I’m a bit of a night owl so usually stay up quite late so I start my day with a strong coffee about 930 in my Pjs.  I’m very lucky that I get to work from home.

What does your day entail?
If I’m working on a new collection I’ll wait until my caffeine has kicked in and then tinker with something I’ve been working on the night before, fresh morning eyes usually help me iron out any problems.  Then i’ll start on a new item in the collection and see if I can bring it in line with everything else.  Sometimes if I just can’t get there – I’ll spend a couple of hours on-line looking for some new inspiration.  I usually have about 4-5 designs at the back of my head that are in various stages of production.

Was the company an overnight success or did you have a lot of obstacles to get to where you are to day?
Ha, it’s hardly a massive success yet.  Right now I’m loving my audience who are enjoying what i’m putting out, I’d love for it to last and for the business to grow but right now this is only my 3rd year working in fashion so i’m very content.

Was there support at school for your dream job?
From my parents there definitely was, my school maybe not so much.  However saying that I never thought I’d be designing loud prints, I thought i’d be a film director. 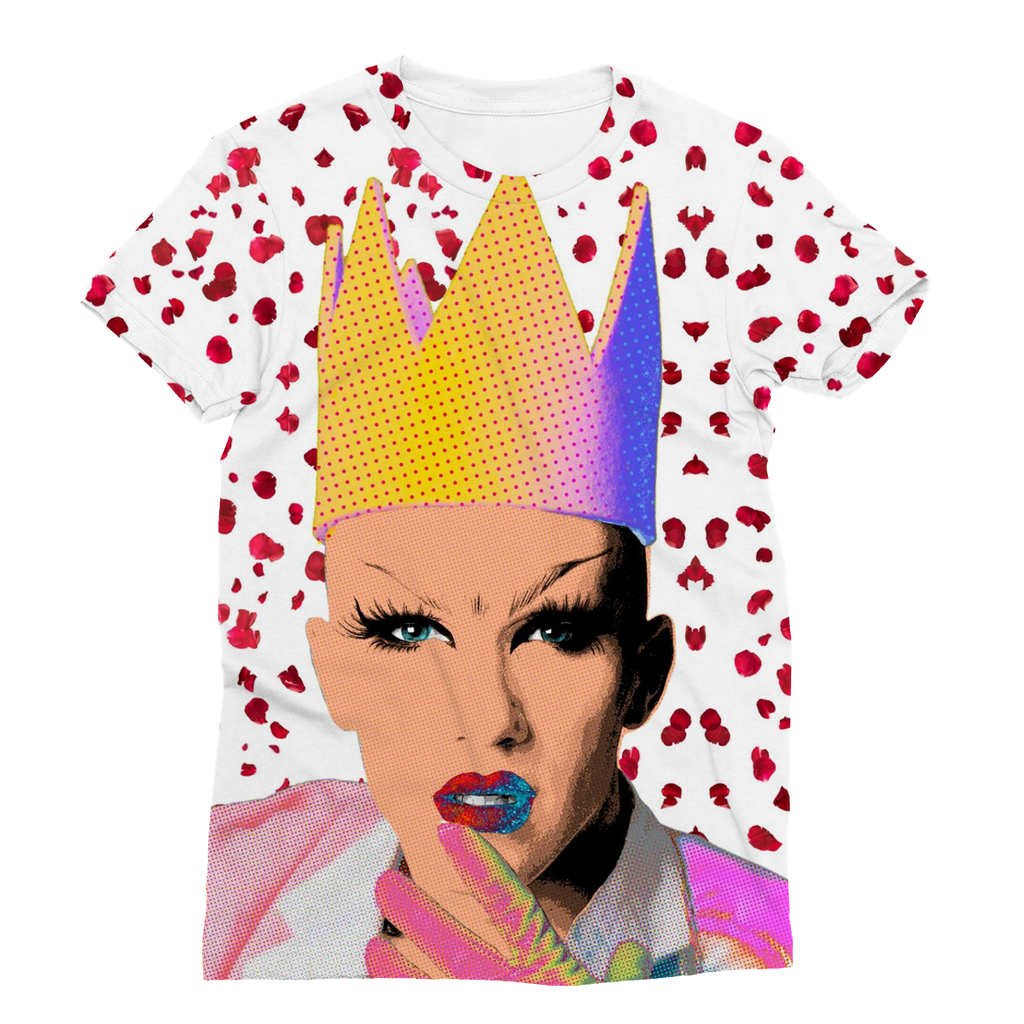 What’s the hardest thing about your job?
Keeping on top of everything. I’m pretty much a one man band, if I drop the ball on something then it’s my fault and no one else’s.

What makes it so fulfilling?
I get to work for myself and do what I want.  If I design something that only I wear and no one else buys – that’s definitely not a fail because I’ve got something new to make me smile.

What advice would you give to others?
When life knocks you down…dust yourself off and throw some glitter on. So how did you get involved with Primark?
I was approached by Menswear buyer Glen Scott last summer.  He had been tasked with exploring new British designers to bring on a capsule collection for Summer 2018.  He had seen my work out in nightclubs and gigs and tracked me down on social media.  He said that people always talked about my clothes and they definitely stood out.  All the designs are unisex and can be worn by anyone of any shape and size. Primark have taken a huge chance on me as a designer and on my aesthetic. I couldn’t be more thrilled. 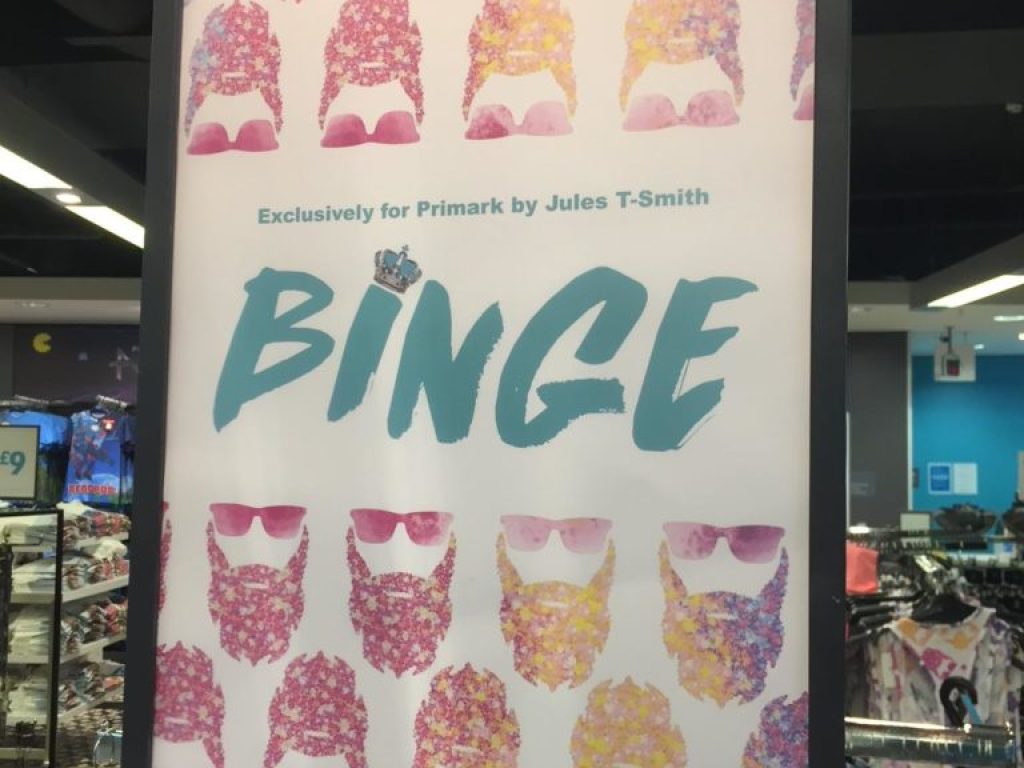 Find his designs in store now.