‘Bullies made me get funny – now I’m raking in the money!’ 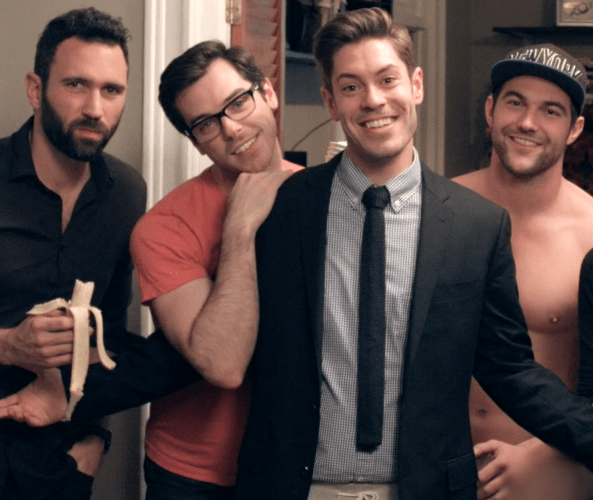 Writer/director Ken Arpino tells us all about his hilarious web series The Queens Project and why he thinks TV still has a long way to go in terms of LGBT representation.

Once upon a time, in the dark distant past, all we had to entertain us was four TV channels that offered us very little variety! But these days, we have thousands of TV channels to choose from, so many that we almost have too much to take in. But thanks to technology and websites like YouTube, there’s even more choice. And even better, we now all have the chance to create programming ourselves.

We recently came across a brilliantly funny web series on YouTube called The Queens Project – which stars our crush BJ Gruber  – that follows the lives of a bunch of young gay guys in New York. It’s low budget, but so much fun that we fell in love with the characters and became instantly hooked. We caught up with the talented writer/director Ken Arpino to find out how he got started….

Thank you!!! The Queens Project is a fast-paced comedic web series about two gay roommates who move to New York City to follow their dreams of becoming Broadway stars– but reality, and lack of talent, set them on a new journey to become their truest, nerdiest selves. 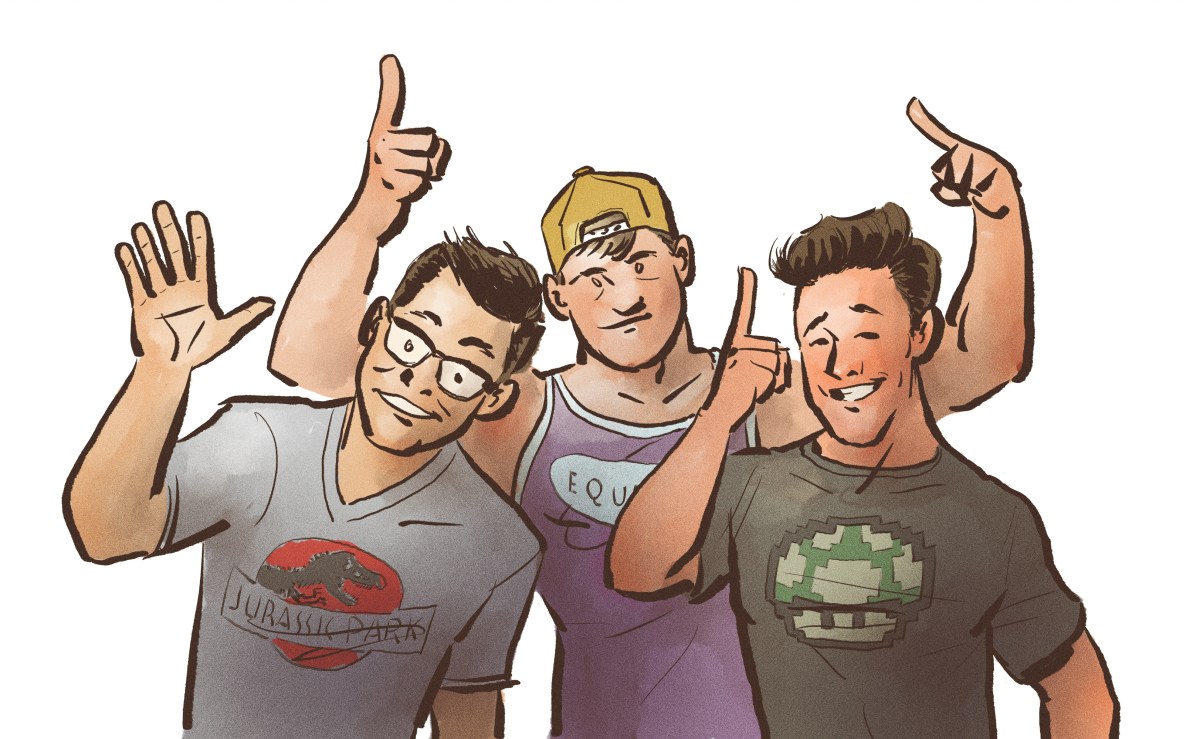 Where did the idea come from?

I wrote a pilot for a new gay-comedy based on the lives and relationships of my own gaggle. My friends are all crazy, lovable characters, so the material was writing itself! The working title of the pilot was The Grindr Diaries which… now I hate, because the LGBT community is SO MUCH MORE than just a series of sexual escapades.

So, I sat down again and realized what I love most about my friends. We’re nerds. We laugh A LOT. And we are nasty to each other– while knowing it all comes from genuine love and a fierce loyalty. I can call Chris Marchant a fat-ass… and mean it… but I better not hear anyone else do it! Season One of The Queens Project was a little more vanilla as I tested the characters… but now in Season Two their relationships are gonna get real brutal.

Why did you decide to do a web series – had you tried pitching production companies?

The web series is to help me test characters. I am so thrilled that people have been able to relate to my principle characters, Gabe and Ash. I am pitching my pilot (which you’ll hear more about very soon) to production companies and using the success of The Queens Project to show them that gay comedies are worth the time and energy it takes to produce them! Everybody else gets a damn show… LGBTQIAs need some! 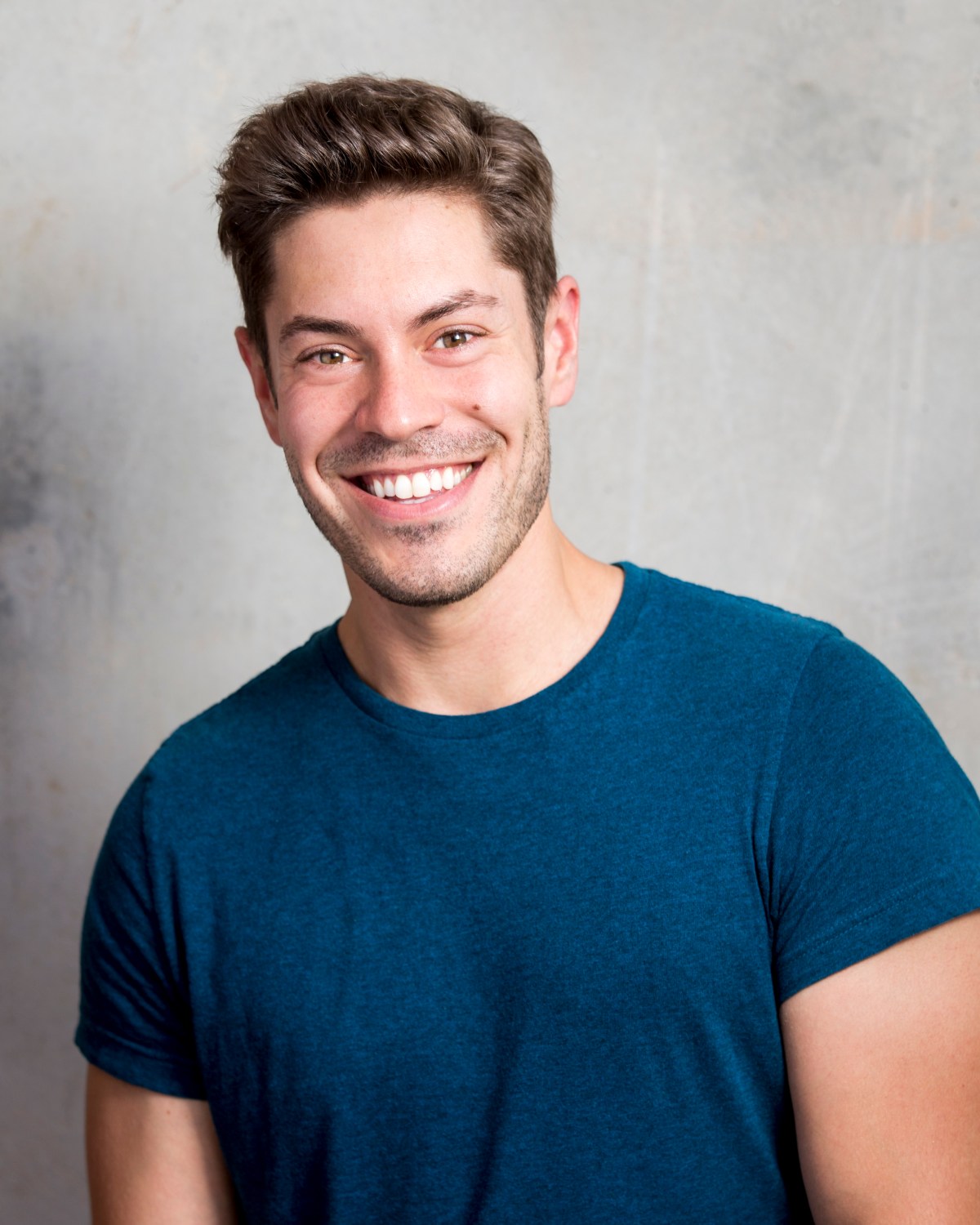 Does the Internet give creatives like yourself more scope and freedom?

Yes; the Internet is great for testing out new material. The internet is also brutally honest. People feel comfortable to say whatever comes to their minds –  without a filter – in comment sections.

Was it important that you tell gay stories in your show?
Gay stories are just stories. So yes; it was important for me to tell stories that were relatable and the characters just happen to be gay. It is sad that we still live in a time where we have to differentiate between the two… but… that’s the reality of the industry right now.

Obviously it’s a comedy – were you keen to not make a serious issues heavy show?
I am working on other projects that will deal with more ‘serious’ issues. However, as I continue to develop the story of The Queens Project I am not afraid to have Gabe or Ash deal with more serious issues. Because they are real. And they happen. And characters in a comedy can’t be immune to reality. 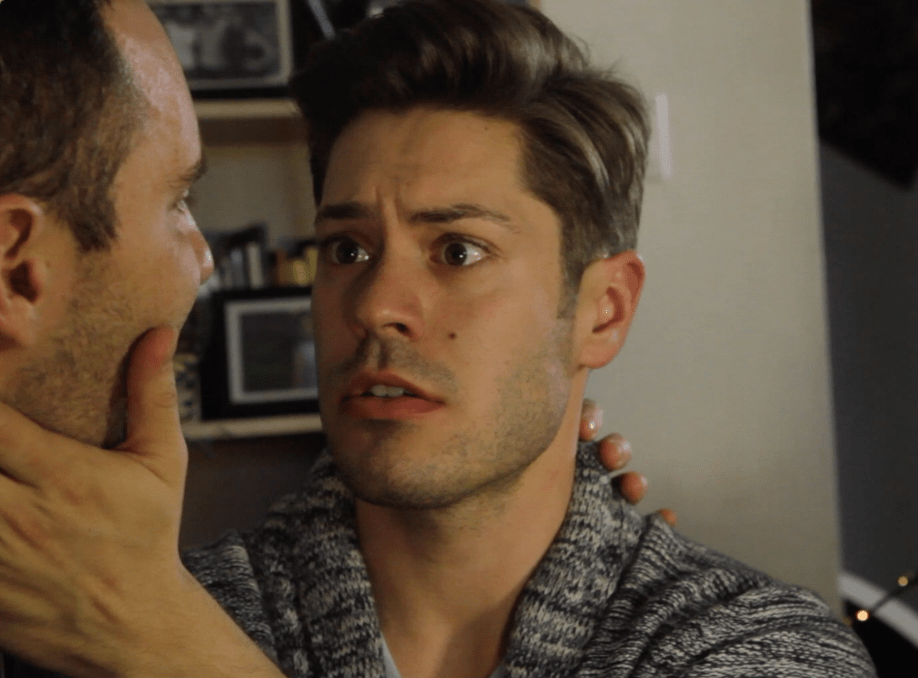 Was this your first online project?

Yes! I was sitting in a sketch writing class at UCB and my teacher Frank Garcia-Hejl would talk about how important it is to find YOUR OWN comedic voice. And the best way to find your own voice is to be generating your own work and seeing what makes you the happiest – finding (and creating) what YOU think is funny. Frank is a super talented guy, so I listened. And now I am writing all the time and it my work makes me really happy.

You have an amazing cast – we fell in love with BJ. Where do you find them and do they get to try their hand at writing too?
I love BJ too! I had another actor that was going to play ‘Gabe,’ but he dropped out at the last minute. I posted the breakdown on Actors Access and found BJ. It was the best thing that could have happened. BJ has been my biggest cheerleader and supporter since this project started. I am SOOOOO happy to have him with me on this and will certainly be using him in other projects as well. Trey Gerrald and I have been friends for years though the theatre community – he is another UCB student – and a REALLY funny guy. He was a natural choice for ‘Nick.’ They aren’t currently writers for the show, but they certainly give me inspiration for their characters. 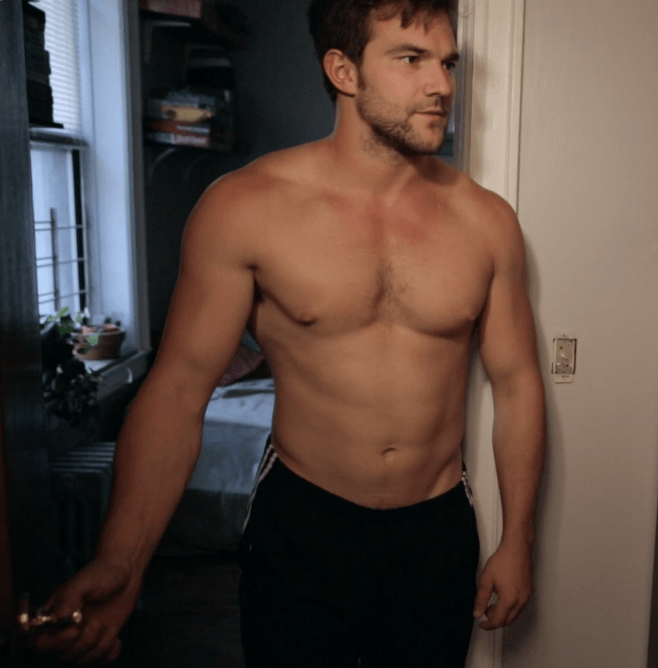 Is New York a creative city – have you got a hub of talent around you?
Yes… I am very fortunate in the talent department. Both on and off camera! Some shout-outs include Dustin Williams, Veronica Cooper, Marty Brown, Barry DeBois, Jamie Hall, and Justin Marr. They have been the best team ever! I am working on another series right now called The Assumption of Mallie, which will star Broadway FAVORITE Keala Settle. This project is still in the development phase, but I am so excited to get it in front of an audience! Make sure to subscribe to my YouTube channel to catch all our fun new stuff!

You did theatre studies at college – was theatre and filmmaking and writing always your plan?
Fun story! So my parents wanted me to get a ‘real’ degree so that I could get a ‘real’ job… you know, one that pays ‘real’ money. So, as a compromise, I decided to apply to ONE theatre program at Emerson College in Boston which at the time had a very low acceptance rate for performing arts students. If I got in, it was meant to be. If not, I was going the business school route. WHELP, I got in. And I have been fortunate/lucky enough to support myself financially through the arts since. So… Yay!

Everyone in this industry faces rejection. It is truly about how you deal with it. I’m not 100% sure why a show with gay characters doesn’t have ‘mass-appeal.’ If straight people can’t relate… they need to live more.

Going back to when you came out, was it an easy experience?

I grew up in a very conservative, religious area right outside of Boston. The kids I went to school with seemed to know I was ‘different’ even before I did. And they were mean. (In addition to being gay I was also a butterball!) I learned to cope with being the outsider by sharpening my wit and making people laugh. If I could make fun of myself, then it wouldn’t hurt so much when others did it. (Blah, blah, blah… we all went through it) Moral of the story, comedy became second nature to me… and now it’s paying my bills. So… thanks, bullies.

Were reactions positive on the whole?

My family has been incredible. I am very fortunate and I know how lucky I am. My mother is the most supportive person I know and she always has great advice when it comes to my work and my dating life. Also, my sisters seem thrilled to have a gay brother. Its very pop-culture now-a-days.

A lot of young gay guys go through some down times during the coming out process – did you suffered from that?

Of course. I think we all do to some degree. I was resigned to the idea of being alone forever. No family, no friends, and certainly no partners. I only knew one other gay person and I knew we weren’t marriage compatible… so I suppose I guessed I was dying alone. But then I got to college (one of the most liberal colleges I might add) and slowly realised that I was not alone. And small minds are for those who refuse to grow. I discounted my family before I even spoke with them, which, luckily for me, was a mistake on my part. My relationships with family members are finally getting stronger because I’m not lying to them about myself. They are getting all of me for better or worse!

Did you ever experience any examples of homophobia?

Yes! In fact, the latest was DURING a taping of The Queens Project! In episode three, The Brown, we shot in a public park in Queens, New York. A man started heckling us from a bench, telling us to jump off the pier – which we ignored – until he decided it was his ‘duty‘ to come over and tell us we are going to hell and we should be ashamed being gay with children present. Well, I was about to let-go on this guy, but the straight boys took care of it for me! In fact, they protected me physically from this guy so he couldn’t even get near me. (My high school, straight-guy-fearing self would NEVER have believed it!) Gabe Bowling, Jamie Hall, Justin Marr, and my bisexual hero, BJ Gruber told this guy off and I didn’t even have to say a word. Then, a nice woman in the park saw what was happening and sat down with the man until we were done shooting so that he wouldn’t come interrupt us again!

In the last twenty years or so have you seen massive changes in gay lifestyle?
Yes! The generation that was supposed to teach us how to come of age in this heteronormative world was lost to the AIDS epidemic. We were lost for a while. But now, we are totally taking on the leadership roles we were meant to take. We’re growing up and speaking out. Having high-profile celebrities, athletes, musicians, and politicians come out has also helped immensely! They helped take the fear out of the unknown. I mean, Doogie Howser is gay! How bad could it be?

What are gay people’s big worries in comparison to say 20 years ago?

Not to sound cliched… but 20 years ago gays were afraid to die. Now, they are afraid to live! Be proud of who you are! Bigots are obsessed with our sex lives… be flattered that they think we get lucky so often! At your next local Gay Agenda meeting, remember to support your neighbor. We have enough shit coming at us… we need to help each other in any way we can.

How has society changed in that time?

More people are coming out. Almost everyone knows someone who is gay. That makes a huge difference in changing minds and hearts. Make it personal.

TV shows feature loads of gays these days – do you think TV needs to do more?

Yes. Yes I do. Gays are still the ‘bit’ characters. We need more shows like Will and Grace on primetime TV. Outlets like Amazon, Hulu, and Netflix are amazing because they give more diverse voices opportunities. The more the better! 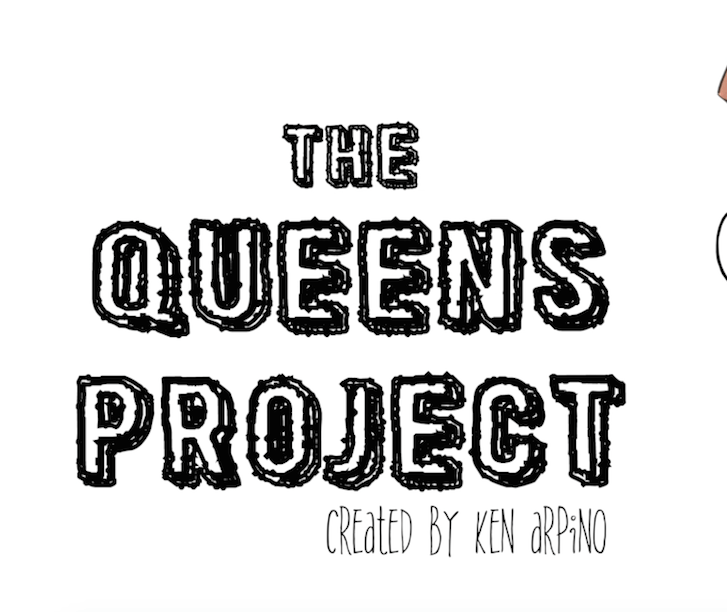