SHOCK NEW TREND: Stealthing – should YOU be worried? 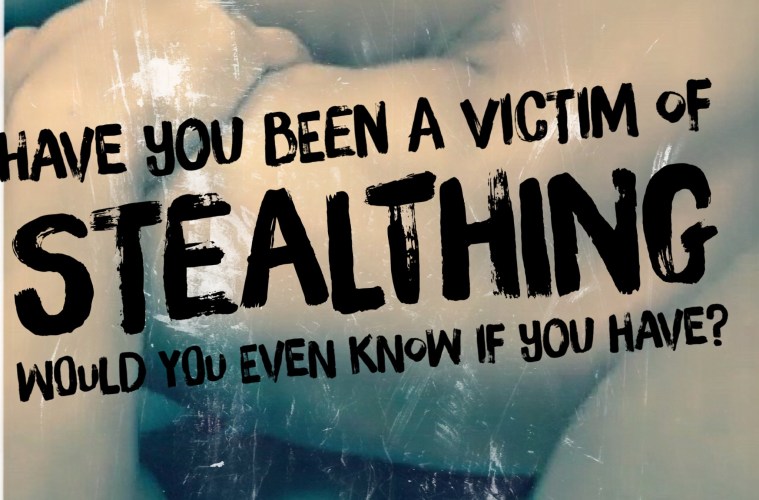 Journalist and GuysLikeU columnist Andy West reports on a scary new trend that might have happened to you without you even knowing! The term came to light recently in the mainstream press after a study was published by Alexandra Brodsky, classing the act as ‘rape-adjacent’ (Nonconsensual condom removal during sexual intercourse).

So far media coverage has been restricted mainly to female victims, with a focus on unwanted pregnancy as well as STIs but with the risk of HIV and the prevalence of ‘chem-sex’ parties on the gay scene, this is likely a serious issue for gay men too. Would you be able to tell if a guy had secretly slipped his condom off during sex at his place, let alone in a sauna, dark room or sex party?

A quick google search will bring up disturbing videos and forum discussions where gay men are boasting about ‘stealthing’ other guys. In one, a man describes having sex with a blind-folded ‘twink’ who ‘had no idea’.

In the comments, there’s a mixed response with some condemning the act as “sick” and others describing it as “******* hot”.

Another chilling post boasts shamelessly: “This was my second date with this bottom. He swirled out while we were fucking. You can hear me ask him if he is awake or not. Then off goes the condom… enjoy.”

One pictureless tweeter, BrisbaneBBStealthing, describes himself as “A shy guy that’s into BB stealthing videos.”

Read More: “If I see a six pack on Tindr its an instant swipe left!”

For many, the word rape-adjacent is too kind. They believe stealthing is rape in the fullest sense of the word. Now there are growing calls to class ‘stealthing’ as a specific sexual crime in UK law.

Rape Crisis have condemned stealthing as a sex crime, and this week two US states introduced legislation that will make stealthing illegal.

In UK law it is far from clear-cut. Rape is classed as ‘the penetration with a penis of the vagina, anus or mouth of another person without their consent.’

In stealthing, it is likely the victim has consented to the penetration of a penis but only on the understanding that the sex is going to be safe and with a condom.

Even so, Ian Kelcey, a Senior Partner in the Criminal Law team at Kelcey and Hall Solicitors, believes stealthing could potentially be classed as rape.

“If the other party made it a strict condition that they only wanted sex if it was safe, it is possible the courts could construe such activity, post-removal of the condom, as being rape”

“We are still waiting for a case to come to court on this point but I think that is a possibility.”

“In stealthing, it is likely the victim has consented to the penetration of a penis but only on the understanding that the sex is going to be safe and with a condom.”

When asked by The Independent why he enjoyed ‘stealthing’, one man simply said: “Because it feels better with no condom on.”

Though it may be obvious to many, the new study from the Columbia Journal of Gender Law explains why victims of ‘stealthing’ feel abused. One woman gives a personal account, saying:

“Obviously the part that really freaked me out was that it was such a blatant violation of what we’d agreed to,” one woman quoted in the study said. “I set a boundary. I was very explicit.”

That feeling would, surely, be no different for a man.

If you have been affected by stealthing or any sexual violence then contact Rape Crisis England and Wales: