Enjoy humpday by drooling over these pics of this Instahunk 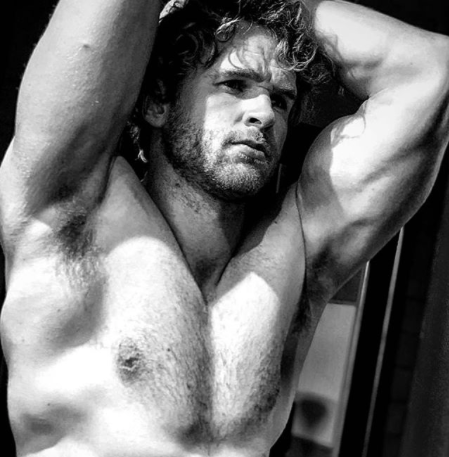 WARNING: IF YOU DON’T LIKE GUYS WITH BIG MUSCLES, PLEASE SKIP THIS STORY!

Although GuysLikeU was conceived to help out young gays trying to navigate their ways through life (which we do rather well, thank you very much), we also like to satisfy readers’ thirsts from time to time.

Yes, we know these days it’s deemed inappropriate to fantasise about boys with buff bods (for God’s sake, when did it actually become a crime to fancy people because they look good????) but we don’t care! Yes, we are proudly GUILTY of posting the occasional thirst pic for your pleasure. So sue us!

Making the most of the sun for some outdoor workouts whilst trying to even out my standard annual dodgy tan lines. One year i will get it right.

But for those who like bit of Wednesday afternoon titilation, we’re sure you’ll be happy be get giddy over one particular lovely. Regular GLU readers will remember this gorgeous fella, Mike Wring. He was the towering 6ft7 hunk we spotted trailing behind TV’s Andi Peters on Good Morning Britain almost two years ago. He was on the show because had had been one of ITV’s competition winners who scooped a huge cash prize. The lucky rascal!

Summer time relaxing in the pool after a sweaty work day.

We then tracked the fella down we discovered that behind the handsome, hulking exterior was a man with a lot of baggage.

In a heartfelt series of interviews Mike told us how he had been cruelly bullied at school and had suffered years of body image and mental health issues which he had thankfully overcome.

Me and the boy. He pulls off the longer lockdown hair better than i do. #dog #doggo #bro #haircut #lockdown #doggy #puppy #twins #family #dogsofinstagram #petsofinstagram #fitness #gym #exercise Photo skills by @jen56785

He also revealed that even though he is now in control of his body image, there is always a danger that his body dysmorphia could return. Luckily, he’s in a fabulous place and long may he be!

Of course, as he’s drop dead gorgeous, we’ve been keeping an eye on the chap ever since and we are pleased to say that life is better for him than ever.

Crazy pump from a workout that included 300 burpees, something acalled a ‘man maker’ and loads of other moves. Never felt so sweaty in my life. Burning fat and keepingbthe cardio up too.

In fact over the past year, Mike has started to fulfil his dream of becoming an actor and has appeared in small roles in shows such as Doctor Who, Spanish Princess, Industry and Gangs of London.

Missing everything about @mygymsalisbury but got to love a good arm day out in the sun. Have really taken the time to train smarter and really work on fat loss and conditioning with some more cardio intensive workouts and doing things i usually hate. Found a new love for burpees.

He also tells us that he has even more exciting projects lined up which he can’t tell us about just yet!

Anyway, enough guff from us… feast your eyes on this gorgeous gentle giant and check out this newest pic of him showing off what God very kindly gave him! (With a bit of extra work!)

Been pushing hard. Mixing it up. Doing things i consider weakness’s. Ready for gyms to open again this week. Grateful for the home gym set up which i will be utilising. This year has had a strange start but excited about whats in store for the rest. #body #fitness #fit #gym #bodybuilding #workout #model #love #motivation #muscle #fitnessmotivation #abs #healthy #fitfam #gymlife #health #instagood #fitnessmodel #photography #fashion #lifestyle #photooftheday #strong #life #training #exercise @mygymsalisbury