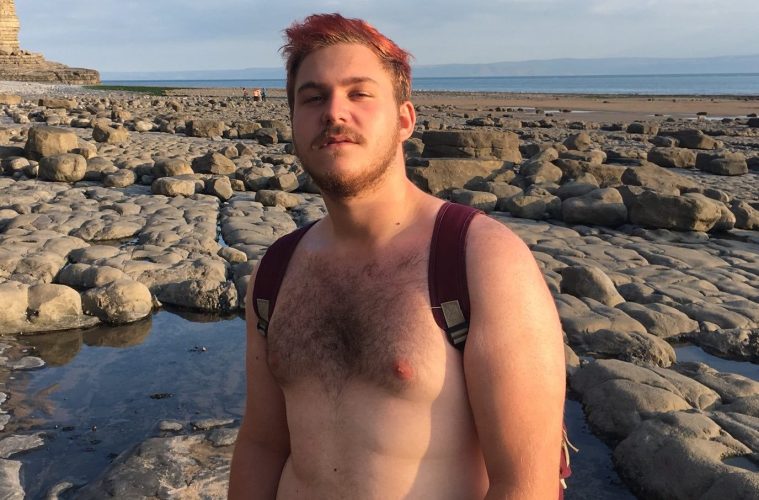 Meet super cute Duncan, a 21 year old student rom Wales who opens up to GuysLikeU about coming out, why he’s in no rush to find love, why he is slowly embracing his body and yearns for a day when we see less six packs in the media.

I sort of realised I was gay when I was probably around 15/16? I first told my best friend at the time over text, coming out as bisexual, and she was fine, she wasn’t phased. I was always that kid who was maybe more vibrant or happy, and that always translated to camp or gay at school, so it wasn’t a huge surprise to anyone, really.

I’d love to say my first experience was a happy, wonderful relationship, but it was a one-off thing with a random person when I was around 18. I was terrified but it was pretty standard. 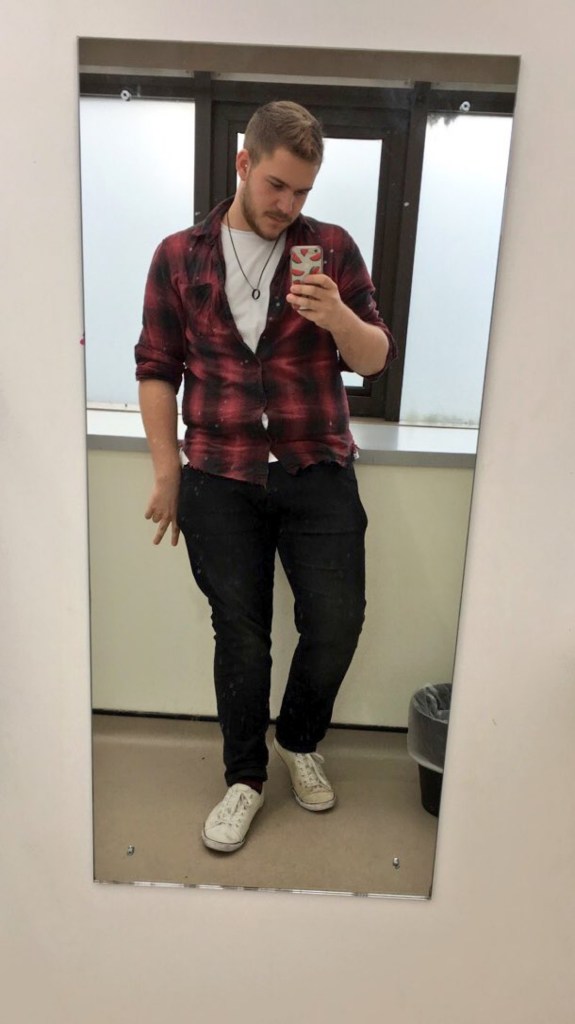 You said you are bisexual first – did you have an initial worry about being gay?

It was definitely a point of upset for me when I was coming to terms with my sexuality, the feeling of being so different to everyone, and being so alone. I definitely had a period of not wanting to be gay because I thought I wanted to get married and have kids and stuff, just to be ‘normal’. But I got through it and being gay and having that life aren’t exclusive from each other!

Hear hear! Did you have an gay role models when you are finding yourself?

When I was growing up I never really saw people who were gay around me or on television. Now, I have such an admiration and respect for members of the LGBTQ+ community around me. But I have always sort of looked up to my mum, and I still do. I was most worried to come out to my mum. I love her so much, and she’s the most important person in my life. I knew she wouldn’t have rejected me or kick me out of home, but I was always uncomfortable with sharing parts of myself with people around me, and this was the biggest part of myself to the person who meant the most to me. She took it well, and after a period of awkwardness, we’re all good. 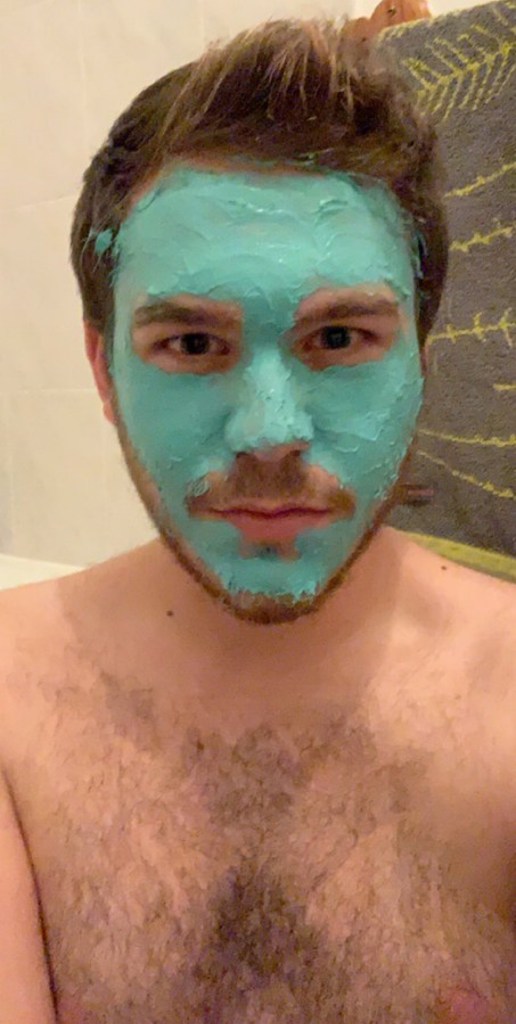 How was it for you at school – did the other guys treat you well?

As I said, I was always sort of pinned as “gay” at school because I was more flamboyant or jokey or happy, and not necessarily the same as the other guys around me at high school. I got a bit of flack for it but nothing major. I mostly just stuck with my friendship group. When I was “out” in sixth form, everyone was really nice and didn’t think anything of it, which was good.

When I moved to university, I was slow to get onto ‘the gay scene’, as I’m not a huge ‘going out to clubs’ kind of person. But I found my LGBT+ society at uni, and started to go out with them and had fun! I didn’t have a huge amount of expectations, but I found some friends and enjoyed myself.

I’ve definitely had the whole ‘guy who doesn’t leave you alone after saying you’re not interested’ thing, which isn’t fun, and I wish I had the courage to stand up a bit more and flat out deny them, but I’ve not had anything too bad, really.

A lot of people think that the scene or gay apps are very superficial… do you agree?

I think ‘gay scenes’ and apps can be superficial. I think that they can be focused on the skinny or the toned or muscled, but I try to surround myself with people who don’t necessarily focus on that or displaying a certain body type, and I think that’s best for me. 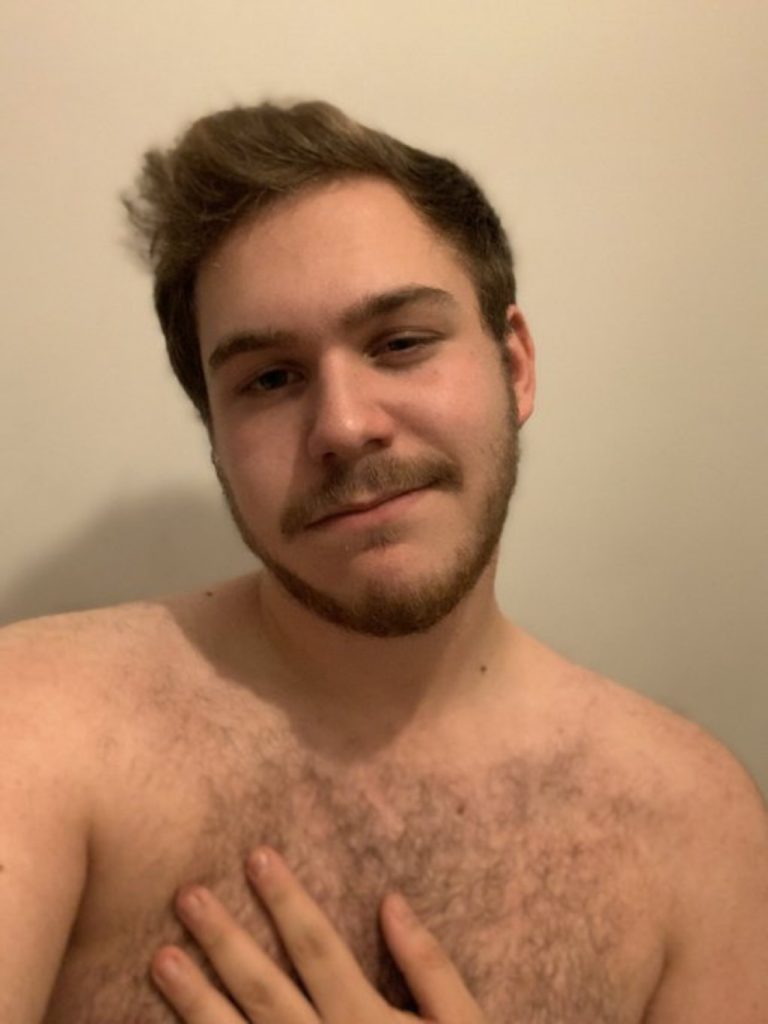 Do you think you can meet the one on the gay scene or online?

I think you can, anything is possible. I know of couples who met through Tinder, Grindr, childhood friends, out on the scene. For me, finding ‘The One’ will happen when it happens, and any relationships I do have are learning experiences for me to develop as a person. If they become ‘The One’ then that’s that.

Have you had your heart broken along the way?

Oh yes. The aftermath of one relationship was very messy, and took several months to get over. But now he and I are on good terms now, so all’s well. I definitely grew in many, many ways from that experience.

Do you think there is too much pressure on finding love? Do you think we should be a bit for open to new experiences?

I think we should always be open to new experiences, but personally, I probably put more than a bit of pressure on myself to try and find love and a person to be with. But I always have to remind myself that I’ve got plenty of time and that I should date around and meet a large variety of people first.

Have you had many dating disasters?

Oh I’ve had my fair share. Once I was on a date with a guy, and we went for a long walk through the countryside, and sat on a bench, chatted for aa while. We stood up, he sort of got in front of me and tried to kiss me, and I slipped and fell down on the bench again. He didn’t take this well and proceeded to walk back really fast, we got the bus in silence, and had a short lunch with very little chat where he then left, leaving me in the middle of this town I didn’t recognize. Dead fun. 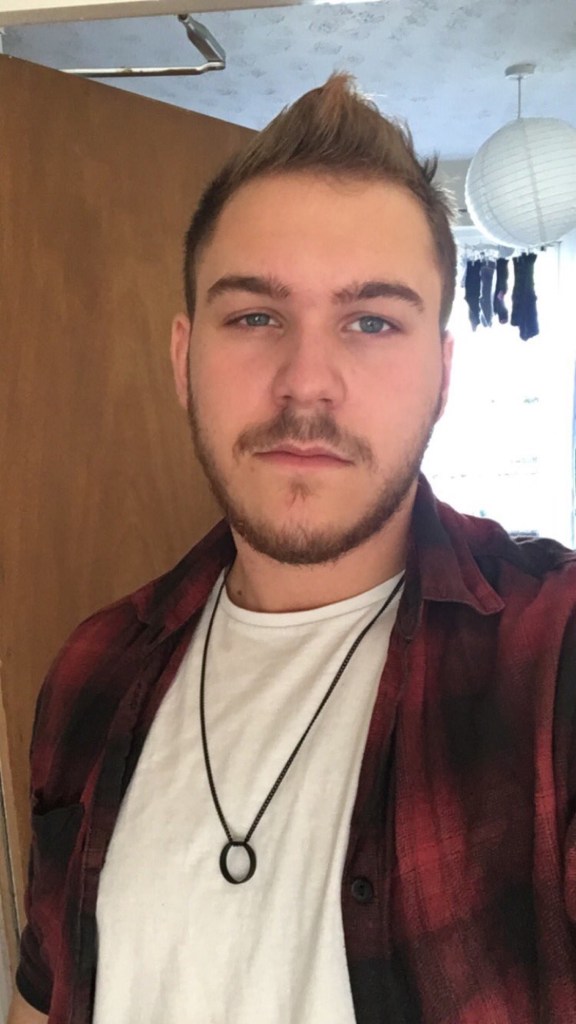 Nothing hugely serious, but the day to day occurrences that don’t cause a lot of harm but still aren’t great. The most recent one was when I came back from Pride Cymru in Cardiff, and I was walking back to my house from the station, a friend and I had glitter and gems and whatever on our faces, and a random guy standing outside of a pub went “alright ladies?” and it’s just stupid really. I’ve been very lucky that I haven’t been on the tail end of some serious homophobia yet – I wouldn’t wish it on anyone.

The gay world seems to fall is divided by guys who are gym bunnies and those who embrace the normalness of their bodies. Have you ever felt you needed to confirm to certain body types?

I’ve never felt a strong urge to conform to certain body types for other people, but I’ve definitely felt at times that I could stand to lose a few pounds, for my own health and to look and feel a bit trimmer. I try to embrace my body because in reality, I’m too lazy to create a drastic change to it, and I’ve got enough problems to deal with on top of how I look. Do you think we see enough normal bodied guys?

In the media, no. Mainstream LGBT+ media seems to be focused on the white, toned, perfect teeth cis men. I really want guys with average or chunky bodies like myself to get some representation, along with people of all different body types, gender identities, and race. In my eyes, there is no ‘normal’ we should conform to with our bodies, and that we should all embrace and be able to see that there’s more to our bodies than the perfect abs or pecs.

Did you ever have any body woes when you were younger or have you always loved the way you look?

I definitely had problems with how I looked when I was younger, especially in stuff like P.E.. I would hate having to get changed in front of the other guys, just because I was so insecure about how I looked. I got teased and it wasn’t fun. It really held me back in the sense that I sort of associate that negative feeling with sports and exercise now, and I am still intimidated to take them back up, because I do enjoy playing sports.

When it comes to meeting guys, what is it you look for? Would a hard body attract you?

Initially, I like a nice face, body doesn’t come into it too much. Often I feel like if they’re too lean, or fall into a certain stereotype, then they automatically wouldn’t be interested in me or we wouldn’t get on. The, I’m pretty much all for the personality and whether or not we ‘click’. That’s not to say I’m not attracted to ‘hard bodies’, I just prefer thicker guys usually. 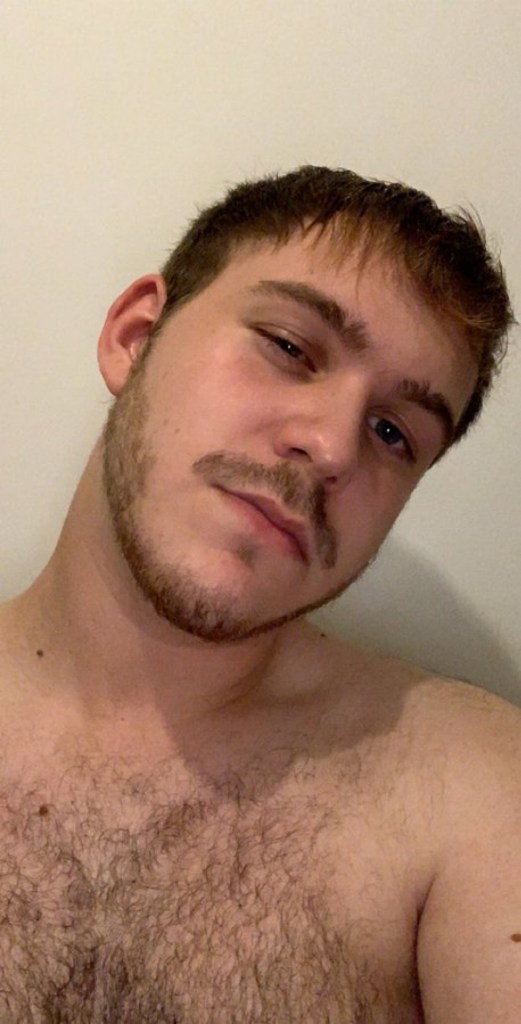 You retweeted a guy on Twitter’s pictures recently, saying you wished you could aspire to have the confidence he had … do you find it difficult to show off your body?

I can find it hard to show off my body. Context usually helps. The guy I retweeted was in his pants and in the pool, and I just really wish I had the confidence to go out and be able to show more of my body like that. I recently went to the beach and felt comfortable enough to not wear a shirt, and eventually post a couple of pictures of me on twitter, which gladly was received really well. I’m still building on my body confidence, and I hope I can get to a point where I don’t feel super intimidated by just whipping off my shirt in a semi-public place.

Would you want to change your body if you could?

As I said, I’d like to lose a few pounds and look a little trimmer, but I’m just a bit lazy, and I enjoy bad food too much. I’d like to have nice arms and shoulders too. But I’m fairly happy as I am for right now.

If you were shirtless are you worried about that other people might say?

Oh of course. I worry that people think I’m too fat, or too pale, or too hairy, or whatever. Even with friends, or partners, I’d still worry, and I do worry. 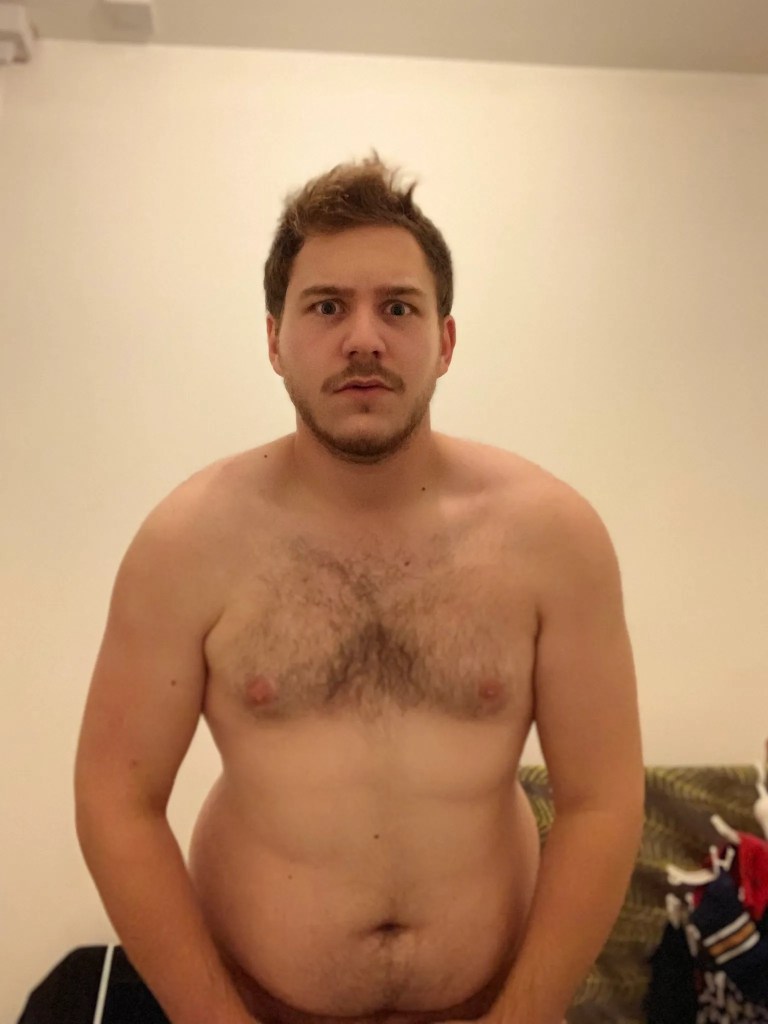 You’re a good looking guy – you must get a lot of attention anyway… When you’re dating, do you get nervous about taking your clothes off for the first time?

I feel I get more attention online than I do in real life, but I suppose the angles and colour adjustments I make maintain the illusion! And for me, taking my clothes off is an anxiety when I’m dating or getting into a relationship with a guy. I usually get to know them and have a feel for how they’d receive my body at this point though, and I usually have a whole other barrel of anxieties about other things at the same time, so it’s fairly low on my list at that point. 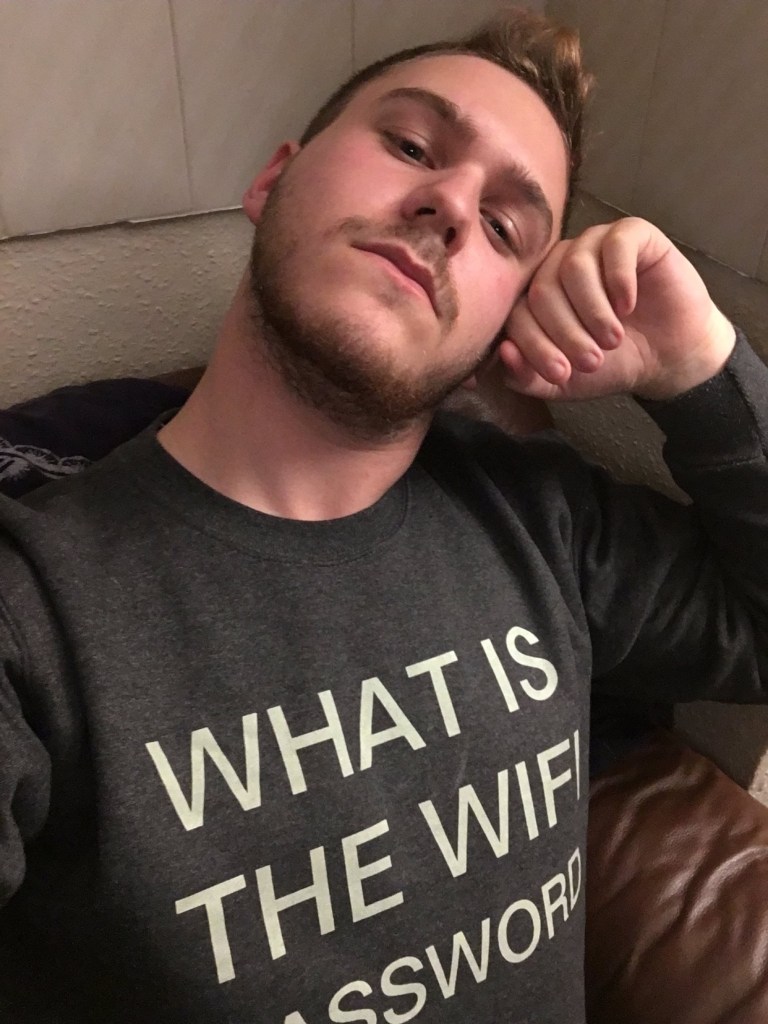 Do you think softer bodies will become the norm?

I mean, there’s beauty in everyone, but I feel the ‘hard bodied look’ is very overdone, and lots of the guys in pants on magazine covers you see all start to look really similar. I’d like an ‘average’ body as well as chunkier and larger guys to be more visible and for everyone to see themselves represented in media, and hopefully can contribute to everyone feeling a bit more comfortable with themselves. The LGBTQ+ community has bigger issues to tackle, and bigger fish to fry than some of us constantly having issues with our body shapes and size.