Dean: ‘I’ve got a boyfriend and you’ll never guess where I found him!’ 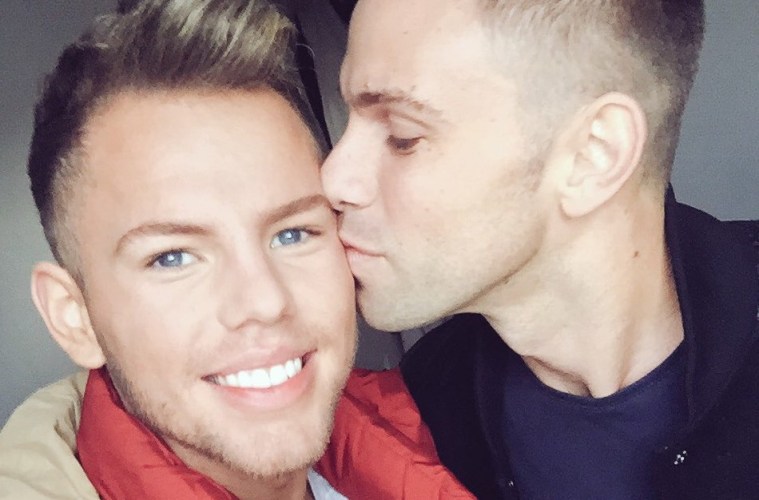 Our Dean has found love! And it sounds like he’s the one!

We all know the fabulous Dean McCullough from E4’s rather excellent (and much missed) Young Free And Single, in which he and five housemates tried desperately to find a mate. Sadly, Cupid’s aim was pretty rubbish and we watched Dean in more tears than romantic clinches.

But there’s good news! Dean is now off the market! Yes, the happy chappy from Northern Ireland has found a guy. Not just any guy, but Mr Bloody Perfect! And Dean is giddy as giddy can be!

Here, the excitable fella reveals how he met new love Sean at an Anti-Velentine’s party, successfully seduced him and why they’ve already used the ‘L’ word (love, that is, not lesbian!) 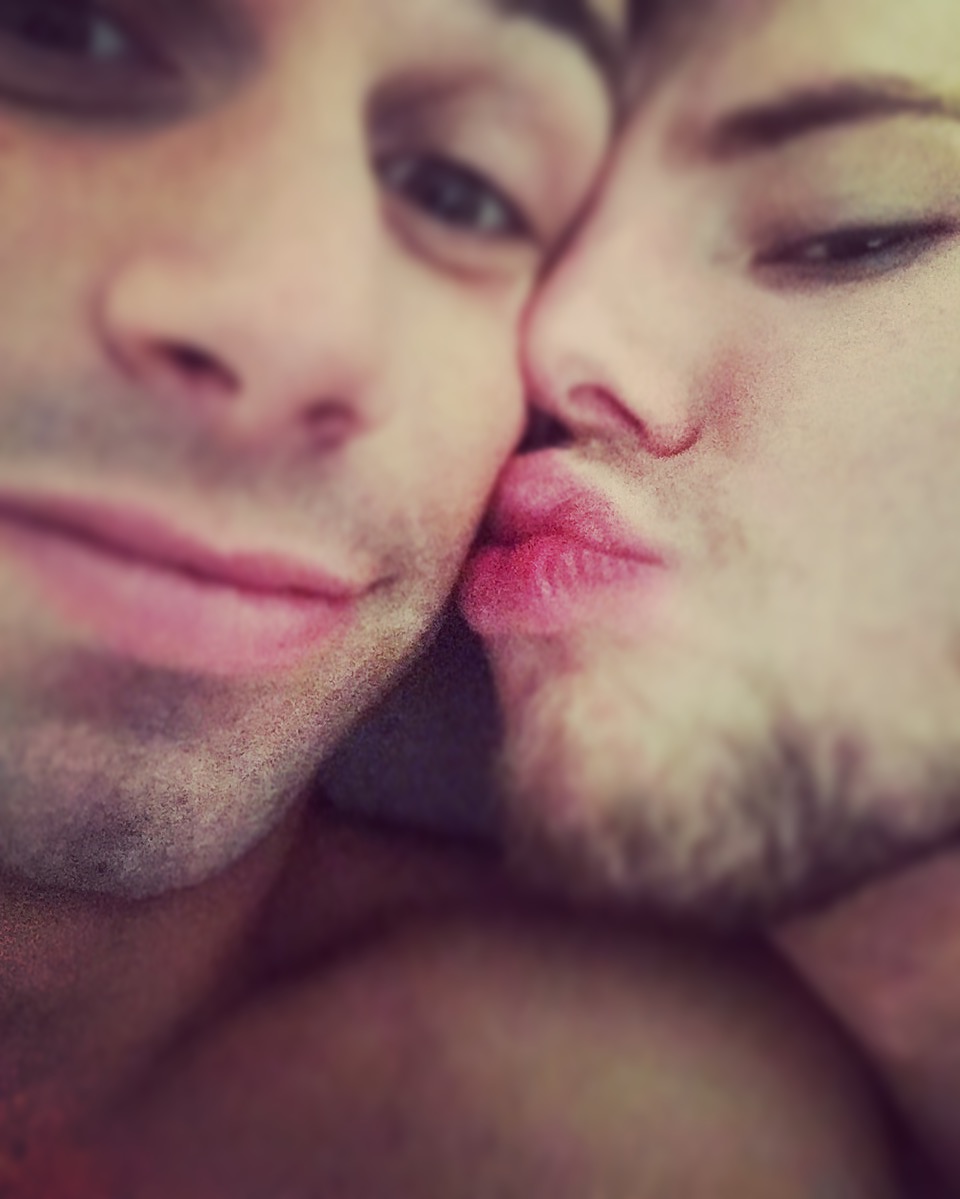 Oh Dean, you’ve got a boyf! Well done!
Well… As you may know I’ve been slightly unlucky in love and so done the whole ‘let’s find a boyfriend’ thing… So to celebrate it this year I had a little impromptu #AntiValentines soirée at my new flat which weirdly consisted of my ex, who I’m still really close with, and a few of his pals who I’d never met (well I’d slept with one of them last year but we won’t go into that). The night was great fun, and had a blast talking bitterly about guys in relationships and how we were not one bit jealous that we hadn’t received any flowers. Then my neighbour popped round to invite us over a singles party they had thrown so we thought, why not, it’s Sunday and we aren’t getting action round here. And what’s the worst that could have happened?

We turned up, I hadn’t been through the door five minutes when in walks this beautiful tanned, white toothed stunner, grinning like a Cheshire Cat. He came straight over to me and said hello and that was it – I was hooked.

I know! Anyway, he said needed to pop to the shops and as I knew the area I kindly escorted him there (I didn’t know the area, I’d just moved in, I just wanted five mins with him alone).

So we got to the end of the road and would you look at that, the shops were all shut! OH NO! What are we gonna do? So we talked and giggled the whole time like two, well, you know, gays! I knew there and then we were gonna get on like a house on fire so I invited him back to mine for a night cap! 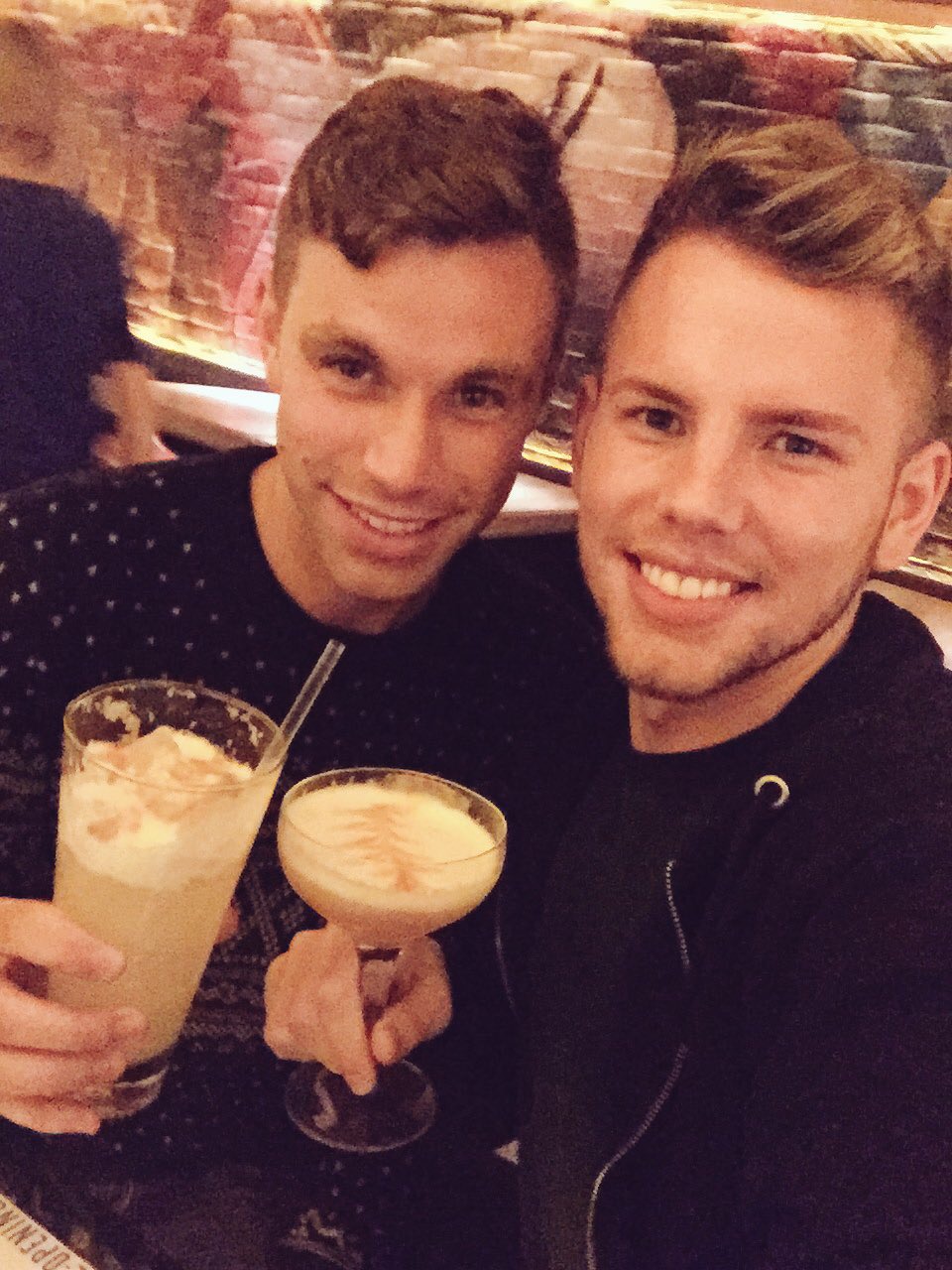 Well, you know how it is! Well, he immediately accepted my offer and we picked up the pace and walked along the moonlit road. It was totes romantic, with the night busses whizzing past! Then all of a sudden, I totally panicked that my flat was like a bomb sight – I’ma bit OCD, you se – so when we got back I kept the lights off (mysterious).

Some,time later, as the sun rose across the streets of Stockwell and Battersea we were still ‘staring into each others eyes’ and realised in my sober state that he was even more beautiful. We laughed at the 107 missed calls from our friends wondering where had got to. But we didn’t care, we knew we had made a new friend in each other.

What was it about you liked about him?

He’s got the most honest eyes I’ve ever seen. I was immediately captivated by them and his smile. He’s just beautiful and bloody hilarious! That said, he’s been to Australia on some expedition to ‘find himself’ and he’s came back with this dodgy half Kent half Australian half American accent… But, hey, I can deal with it.

Had you been actively looking for a guy for long?

(HAHA) You could say that! Isn’t it funny, I’ve been single for two  and a half years, starred in a reality dating show, presented a dating show and all it took was an #AntiValentines party to meet the man of my dreams in the middle of the most romantic night of the year!!

You were brave to go for that walk – are you usually that brave?

Anything can happen when the wines flowing!

You were braver still to ask him back to yours. Did you sense that he was interested?

I just knew. I’m not a one night stand kind of girl (don’t look at me like that!) but yeah, if anything I just wanted to spend time with him. I knew he wasn’t enjoying the party and it was just across from mine so if we got back, turned the lights on and he looked like Shrek I could send him on his way and get a good nights sleep! (Always thinking ahead) 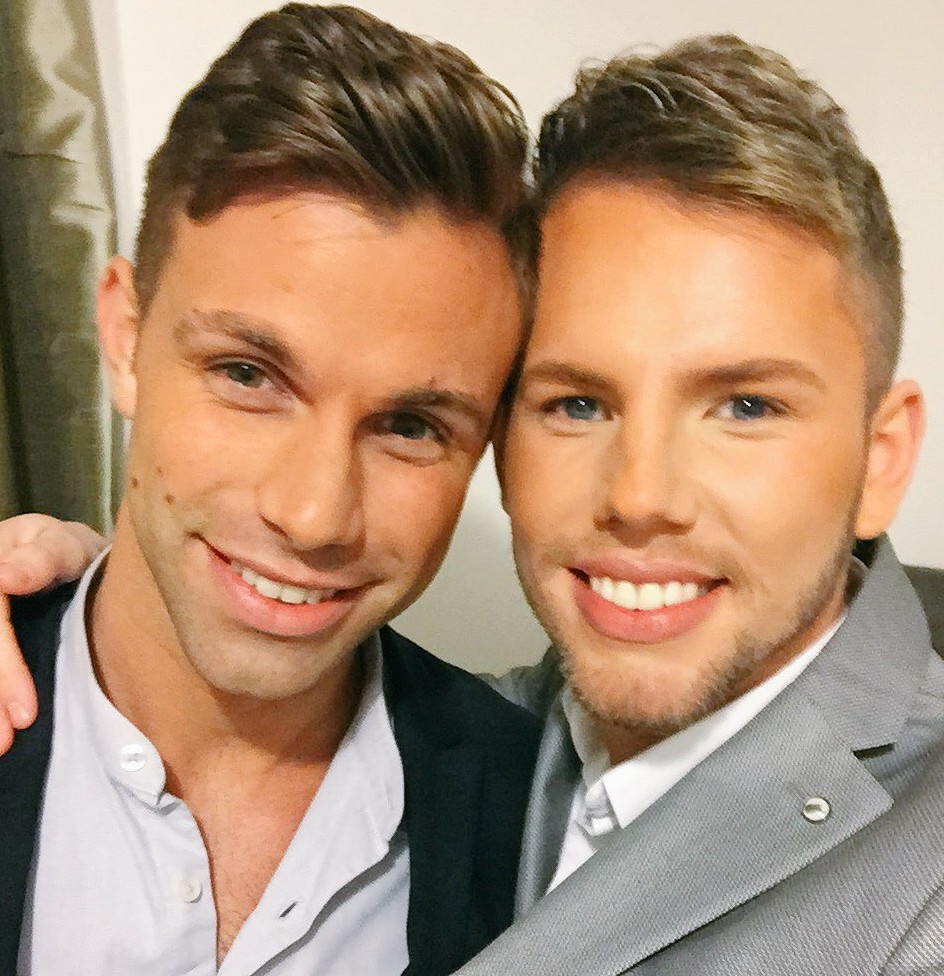 You’ve already exchanged ‘I love yous’? Are you not rushing ahead too fast?

Not at all! If you love someone, you have to tell them. Life is too short. It was weird because I took him for dinner on the Thursday and that’s when I knew. We had two days apart from when we first met and I couldn’t stop thinking about him. We spoke on the phone for hours and hours and then he turned up at my door with a big beautiful bunch of flowers and as soon as I saw his eyes again I just knew – I love this man. We told each other at exactly the same time too – it was freaky!

Do you tend to throw yourself into relationships easily?

No! I am usually so cautious as I don’t ever trust anyone, I’m worried I’m gonna get hurt. I worry that my feelings won’t be reciprocated and that they’re gonna think I’m too full on and run away, so I play it cool. But with this man, I feel different and I’ve never felt so free. There’s a lot to be said about being in a relationship but I feel like he’s my best mate, we’ve been through so much already with different bits and I honestly feel like we are gonna be together for a long time! (If he behaves)

In the past why have they ended?

I’ve been cheated on a few times, which is why I have trust issues, and it’s broken my heart cause I thought I was in love. I’ve kept myself single for so long cause I just didn’t think anyone was good enough for me. My mum always taught me to look after number one and she was right. I always get a gut feeling if things aren’t going well so I’ll cut it off and it’s usually very dramatic and messy (of course). Thankfully my gut is now telling me all good things, I trust him with my life and I feel super chilled but I’m still looking after number one! *hehe*

Are you a fussy boyf?

Yeah, I just want the best for my boyfriend and I which means I like things a certain way. I love surprises and being spontaneous and just letting go together but when it comes to being honest, open and taking care of each other I have high standards. I used to look at my best friend who I was bridesman for at her wedding and think ‘why is she so fussy about everything’ and now I know it’s cause she’s madly in love with her husband.

How important is havign a boyfriend?

It’s not important for me to be in a relationship. In fact I was actually enjoying being single. My friends are very shocked at how well I’ve adapted. They just can’t cope! It’s like never thought they’d see the day (I’m trying not to get insulted!) but everyone loves him and we all go on nights out and he just fits in so nothing has changed. No hat buying just yet though guys, yeah? He’s still picking the ring! 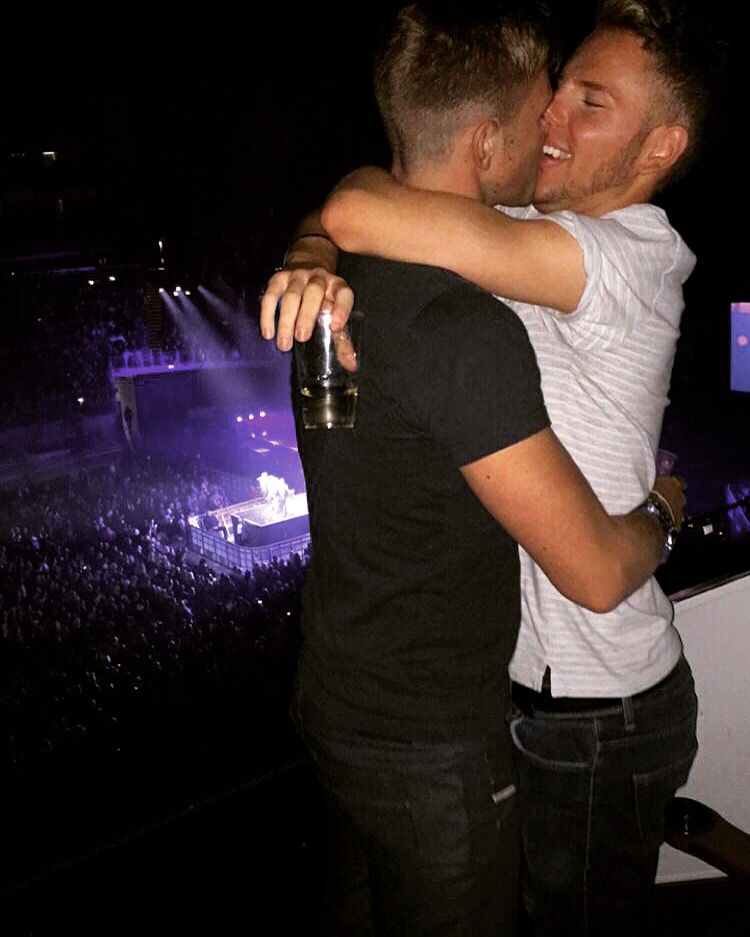 Do you feel twitchy if you don’t have one?

I spent two years sleeping alone and being the single one at the wedding, not to mention having to deal with people coming up to me in the street and asking me ‘have you found the one yet mate?’ So I’m used to it – the amount of messages I’ve had from people is jokes – I’m like the cat who got the cream!

What does the future hold?

Who knows what’s round the corner? I’ve got big things coming up career wise and so does he. I’ve just got my own flat in central and I’ve never been happier. I’ve met his family who I absolutely adore and we are going on holiday together next month. Apart from that, I’m riding the waves and enjoying being in love for the first time.