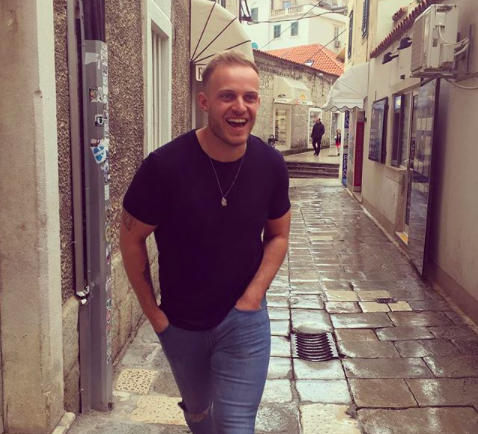 Hywel Kennedy chats to Joe Jordan-Richardson about how cycling saved him from himself.

As we all by now, 2020 will undoubtedly go down in history as one of the worst for many. Uncertain times lead to uncertain minds. For 27 year old Joe Jordan-Richardson from New Inn, Pontypool in Waled, things hit him particularly bad.

The scourge of COVID-19 meant that Joe lost his job, his apartment and his car.  All things he was used to and cherished. Tensions and stresses from his personal circumstances led to things becoming tricky in his relationships and led to things ending with his girlfriend (sorry boys, but he’s a straight!).

“I fell to the depths of despair and I felt as low as you can possibly get,” the ally tells GuysLikeU.com. “I considered the worst possible things imaginable. I’ve suffered over the years with anxiety, and have battled depression previously, but this was next level!

Has anyone seen my penny farthing?

Joe says he struggled for weeks on end, until he discovered cycling.

“My friend introduced me to it and the second I sat on the saddle, I fell in love”. Joe felt glimmers of happiness again. “For up to four hours at a time on my bike, I would focus on nothing else but the road head with pure enjoyment”. It was the only time of the day where he could clear his head, escape, and think clearly about what was happening in his life.

When asked by a friend about his job prospects, Joe jokingly said “Mate, I’d take a job anywhere between Wales and Berlin right now!”. Just like that, Joe’s Journey Idea came to life!

Great weekend in Scotland with @robert_graham14 legs have had a beating but looking forward to getting back out soon! 💪🏻🏴󠁧󠁢󠁳󠁣󠁴󠁿

Joe’s Journey idea was conceived from this conversation. And so today (October 17, 2020), Joe embarks on his jaunt that he will see him ride travel 1000 miles from Wales to Berlin, setting up and conducting zoom and skype job interviews on route.

“I really want to show people that no matter how hard life gets, that they can still push through,” he says.

Joe will be filming daily video diaries, and recording any video job interviews he has as he cycles! Not an easy task… These will be uploaded on his social channels! There’ll also be live updates and Joe will be appearing on a number of podcasts discussing his journey!

Friday brew ready to be a rugger bugger all weekend 🏉🏉

Joe will also be publishing his mobile number, so that anyone suffering with mental health issues or just wants a chat can call him. He openly encourages people to phone and talk!

Joe’s journey will be physically enduring, taking on different weather, terrain, road surfaces and he’s pushing through all in the name of Mental Health Awareness.

A fundraising page has already been created and you can support him in raising money for Mind Charity here:  https://www.justgiving.com/fundraising/jjr-newport-berlin