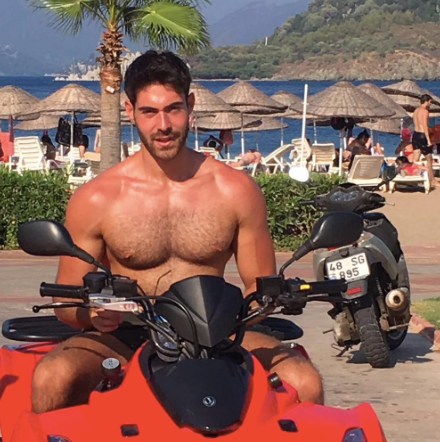 No, Ollie was the incredibly and ridiculously handsome guy who appeared on trashy dating show Love Island. Sadly he stayed for literally 24 hours before he was cruelly booted off the show by those muscle-hungry slappers with zero taste. Silly silly girls! Now, he may have been in our lives a short time but we at GuysLikeU know a star-slash-hunk when we see one and have kept tabs on him ever since.

And one of the things that drew us most to the stunning model – aside from his heavenly face and manly ways – was his brazen display of neatly-trimmed chest hair. In a world where most men shave and pluck themselves, he was most definitely a refreshing change. So imagine how we felt when we saw an Instagram post this week in which Oliver admitted that he was considering waxing off his chest fuzz for a job! Outrageous! We were appalled.

Am I scared about getting waxed? Not in the slightest 👀👀👀😒 #nickbateman I've stolen your side profile. Sorry buddy @proteinworld hi 👋🏻 haha

Panicked, we tried to find some kind of rescue organisation that could save the day and persuade the handsome devil not to deface that delish bod! But, sadly, we couldn’t actually find one. Or actually be that bothered to find one!

Luckily, however, fate intervened and the day was saved, as Oliver revealed in a subsequent instagram post that he ‘couldn’t go through with it’ and that the clients who had booked him had – wisely – ‘said it could stay’!

Halleluah! So all’s well that ends well, eh? Yes, indeed. Now isn’t it about time we pinned Ollie down again for another chat? Ollie….?

If you missed our last interview with Ollie – click HERE