Awks! WATCH Sinitta put her foot in it with heartbroken TV star! 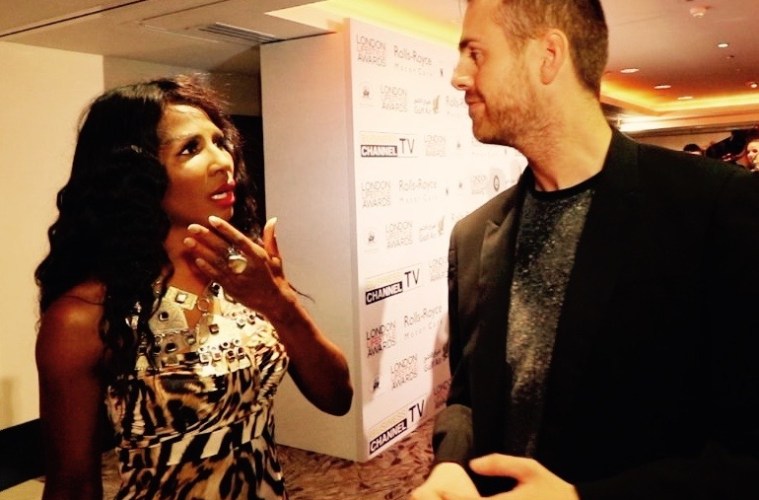 Gays looking for a boyfriend need look no further – we all have a super duper new wing woman in pop super songstress Sinitta!

The So Macho star has recently taken it upon herself to help Big Brother cutie and recently single Andy West find a new boyfriend.

Fancy a date with Andy? Catch him at the Phoenix Artist Bar on October 19 when he performs a one man show called Andy, Can You Come To The Diary Room. Tickets available HERE

However, while they are now bosom buddies intent on finding the dashing Mr West a guy with big blue eyes and an ability to satisfy, their first meeting was actually sensationally awkward.

Meeting on the red carpet at the London Lifestyle Awards, Snit dashed up the 6ft2 TV hunk and gushed about how much she had loved watching the brainy fella in the recent summer BB series and had been so touched when his boyfriend-of-the-time Ed Hutton popped the question in the house.

However, when Andy informed her that his relationship was no more, following the shock revelations that his now-ex had cheated on him, Sinitta looked like she wanted the ground to open up and swallow her whole. ‘You broke up,’ she gasped. ‘Are you serious?’

Once Sinitta had taken her foot out of her gob, the pop superstar very kindly offered Andy some handy love advice and pledged to help him find a new guy! ‘I’m going to fix you up,’ she declared. ‘You’re lovely. Much prettier in real life!’

I am so mad at your ex! Want to slap his face and kick his butt! Yes! I have Gorge for you! Pure pure pure Gorge with brains and Heart! https://t.co/4OELkVcI3Q

Oh no don't be we've all made mistakes. He's an amazing guy and he did a lot for me. It's all in the past and I'm looking ahead now! 🙂 x https://t.co/RD7zyiCZ3n

You are cute!!! @AndyWestTV would we go to the States for a date? https://t.co/htWw0jQTcM

Since their awkward meeting a week or so ago, a determined Sinitta has been busy conducting a search for Mr Right and has found some fellas as far flung as New York. Touched by her efforts, Andy is still to meet any of these carefully selected suitors, but plans to dive in when he has a mo!

Fancy a date with Andy? Catch him at the Phoenix Artist Bar on October 19 when he performs a one man show called Andy, Can You Come To The Diary Room. Tickets available HERE